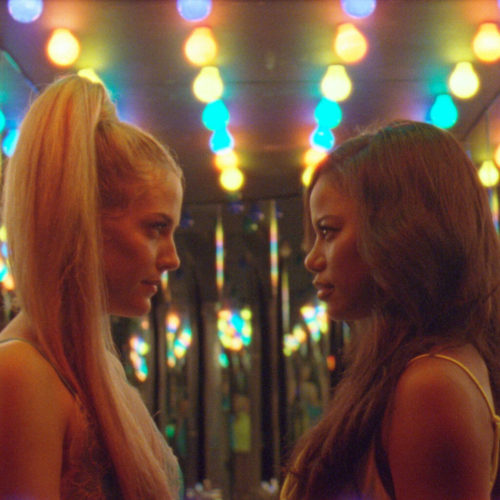 Riley Keough and Taylour Paige go on a wild road trip in this unpredictable and thrilling drama.

This is the dawn of a new era – the era of movies based on Twitter threads.

Zola, based on the 148-tweet thread written by Aziah ‘Zola’ King in October 2015, tells the story of the wild trip the Detroit waitress (played by Taylour Paige) took to Tampa, Florida with fellow stripper Stefani (Riley Keough), after meeting her at her restaurant.

Stefani promises her that they’ll rake in thousands simply by pole dancing over the weekend but that’s not the case and the whole trip spirals out of control.

This story is insane, and it’s mind-blowing that it’s based on actual events.

While there are some differences between the tweets and the movie – some poetic licence has definitely been taken – it is ultimately loyal to the general gist of the true story.

Also, some of the tweets are directly used in the voiceover, while the real Zola’s account of what a person said or texted are sometimes used in the script.

Because it is based on a Twitter thread, the film doesn’t have a traditional structure and the events wrap up pretty quickly, meaning there’s not much of an ending – it basically just stops! It’s a shame director Janicza Bravo opted against using some of the later tweets in the thread because they would have made for an interesting epilogue.

The style of the movie won’t be to everyone’s tastes – Bravo makes quirky decisions throughout and they don’t always work. However, she effectively gave the film a chaotic energy and unpredictable nature, the script is very funny, and the performances were top notch.

While the film is named after Zola, that character doesn’t drive the story forward and is mostly just reactionary to all the craziness going on around her.

Despite that, Paige gave her a great attitude and her pole dancing skills are incredible. She is the quieter of the two and is often outshone by Keough, who gives a larger-than-life performance complete with a rapid-fire “blaccent”.

They are well supported by Nicholas Braun – cousin Greg from Succession – as Stefani’s stupid and clumsy boyfriend Derrek, and Colman Domingo as her pimp X. Domingo is sensational here because X has a split personality – he seems very nice and charming but can flip without notice and become really scary.

You will never guess what happens in Zola and it’s best you avoid the Twitter thread beforehand otherwise you’ll spoil the wild ride you’re in for.