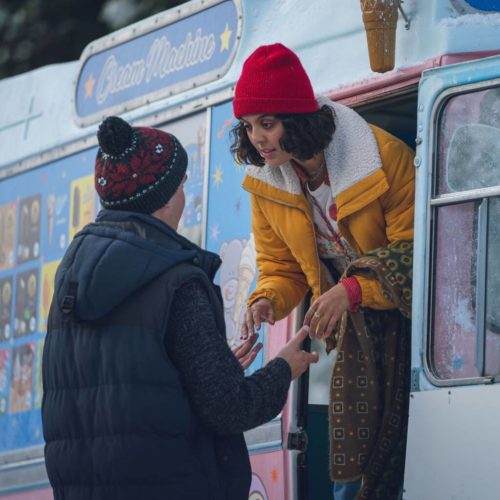 Your Christmas or Mine?

Verdict: This festive comedy is quite funny and charming at times but is ultimately bang-average and forgettable

Asa Butterfield and Cora Kirk play a boyfriend and girlfriend who accidentally end up with each other’s families over Christmas.

It wouldn’t be Christmas without a string of festive comedies – and next up is Your Christmas or Mine?

The movie begins in Marylebone Station on the eve of Christmas Eve.

New couple James (Asa Butterfield) and Hayley (Cora Kirk) say their goodbyes and get on their respective trains home – her to Macclesfield and him to Kemble.

However, as a surprise romantic gesture, they switch trains at the last minute so James ends up on the train to Macclesfield – which Hayley is no longer on – and has to go to her parents’ house without her. Hayley’s parents Geoff (Daniel Mays) and Kath (Angela Griffin) have no idea he exists so it makes the situation rather awkward.

Equally, Hayley has no idea James is super wealthy until she rocks up to his sprawling estate in the country and meets his housekeeper Iris (Harriet Walter), and snooty father Humphrey (Alex Jennings).

Plenty of secrets are revealed as James and Hayley try to switch back despite obstacles including a lost phone and cancelled trains.

In order to enjoy Your Christmas or Mine?, you have to roll with all the unlikely moments and not question them.

Would they be able to switch trains that easily? No. Would Hayley manage to find James’s home without her phone or Google maps? No. But you have to brush those aside because the story is sweet and its heart is in the right place and it might still win you over eventually.

The screenplay is very average and the actors do the best they can to sell it. Lucien Laviscount as Hayley’s acquaintance Steve gets the shortest straw and gives a very cringe-worthy performance.

The leads are both likeable enough but they’re not a convincing couple and you might not invest in them working out their differences following all these revelations.

Your Christmas or Mine? is quite funny and charming at times and has buckets of festive cheer and sentimentality.

If you can gloss over some of its misgivings, this average romcom may make you feel warm and fuzzy inside by the end!