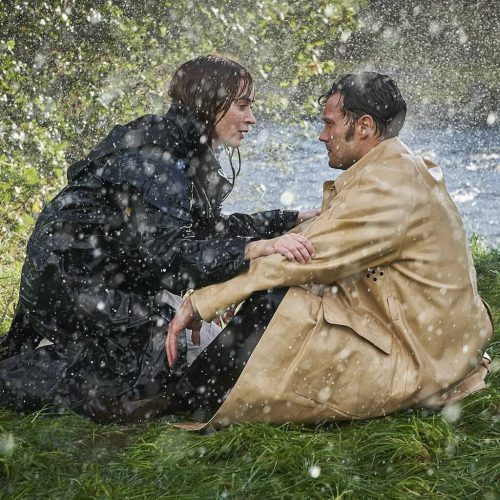 Emily Blunt and Jamie Dornan play neighbouring farmers who are destined to be together – he just hasn’t realised it yet.

You may have heard about Wild Mountain Thyme thanks to the widespread ridicule on social media over the Irish accents when the trailer came out late last year. And now you can hear them in all their dodgy glory!

Directed by John Patrick Shanley, who has adapted his 2014 Broadway play Outside Mullingar, Wild Mountain Thyme stars Emily Blunt and Jamie Dornan as Rosemary Muldoon and Anthony Reilly, who grew up on neighbouring farms and seem destined to be together – he just doesn’t know it yet.

Rosemary has been in love with Anthony for years and he’s absolutely oblivious. However, when his American cousin Adam Kelly (Jon Hamm) visits the farm, to potentially take it over after Anthony’s father Tony (Christopher Walken) dies, he complicates matters by becoming attracted to Rosemary.

It’s hard to believe that talented actors such as these would sign up for this bizarre and over-the-top romantic comedy.

The absurdity of it is quite amusing and you can’t help but laugh about how silly it is – and that’s before you reach the late twist that is so ridiculous you’ll be floored and baffled by it.

Even if you (wisely) hadn’t been taking this frivolous, lightweight movie seriously, you’ll probably still end up utterly dumbfounded.

Blunt and Dornan’s characters don’t feel like real people; to illustrate how sassy and headstrong and desperate to be with Anthony she is, Blunt stomps around the farm and huffs a lot, while he’s so introverted and eccentric, you can understand why his father doesn’t want to leave the farm to him when there’s a safer bet available.

The screenplay never manages to make the characters anything more than caricatures and it’s almost as if you’re watching a comedy sketch. It doesn’t help that it’s littered with cliched Irish references to accompany the obvious landscape shots and eyebrow-raising accents.

As the trailer made pretty clear, the accents in Wild Mountain Thyme are all over the place. Walken makes a very weak attempt, while Blunt goes the opposite way and throws herself into the accent with such gusto she goes completely overboard. Dornan, who is Northern Irish, comes off slightly better but clearly had some trouble switching to Irish and his effort is very inconsistent.

Hamm is saved by the fact that he has to play a charming and smooth American businessman, something the Mad Men star’s got plenty of experience doing.

You can’t help but expect more from this film given the cast that signed up and the fact Shanley is a Tony and Oscar-winning playwright and filmmaker. However, Wild Mountain Thyme turns out to be an absurd and forgettable romcom that was a bad call for all involved.