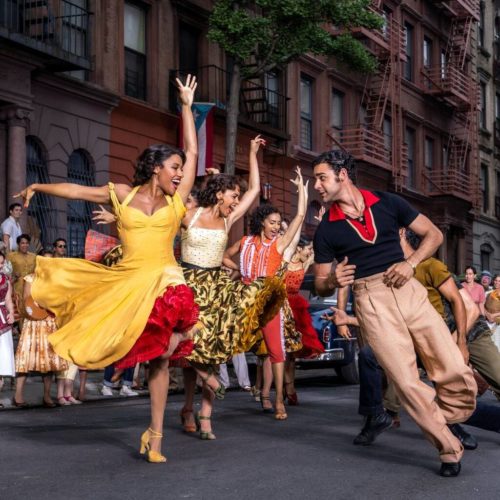 Verdict: Steven Spielberg breathes new life into the classic musical with sensational musical numbers and a terrific cast of newcomers

Rachel Zegler and Ansel Elgort play Maria and Tony, lovers from two rival gangs, in this new retelling of the classic musical.

Steven Spielberg finally achieves his musical ambitions with the new adaptation of the classic stage show West Side Story.

The story, inspired by Shakespeare’s Romeo and Juliet, tells the story of two rival gangs in New York; the Jets (who are white) and the Sharks (who are Puerto Rican). Despite being on either side of the divide, Maria (Rachel Zegler) falls in love with Tony (Ansel Elgort).

Spielberg has always dreamed of making a movie musical and you would never know this was his first attempt as the musical numbers are so well shot. The camera moves in a way that makes you really appreciate the choreography – which is original but in keeping with the earlier work – and how talented his cast is.

The sequence for America is a particular standout, with the number being one of the best in recent years. It is colourful, joyful and fun, with stunning choreography and a star-making performance from Ariana DeBose as Maria’s friend Anita.

Spielberg and screenwriter Tony Kushner have made a number of changes for their film, sometimes changing the context of a song, switching up the order of the numbers and who sings them, for example.

They’ve also righted the wrongs of the 1961 film, in which white actors had their skin darkened to play Puerto Ricans. There are huge improvements in terms of diversity, inclusion, and representation here – all of the Puerto Rican characters are portrayed by Latinx actors and they speak interchangeably in Spanish and English, with the Spanish not being subtitled.

Despite all these changes, the film still feels a bit too old-fashioned for 2021. It’s very faithful and reverential to the source material, perhaps too much so, and the storyline feels quite dated – two people falling in love forever after a brief encounter doesn’t happen in movies anymore, for good reason. This makes it hard to care for the central romance.

The film can be divided into two halves, with “the rumble” – where the gangs fight – marking the central point. The musical numbers were excellent, the film looked gorgeous, and it was a joy watching the new cast sing the familiar songs. But the story after the rumble lets it down (this is the same for the 1961 version too). It was hard to root for Tony and Maria after what he’d done and the final act is very slow, serious, and lacks the earlier momentum.

Elgort may be the biggest name among the young cast but he is the weakest link. Standing alongside the newcomers, he sticks out because his performance just wasn’t as committed or emotionally convincing as everyone else. This is most apparent when you compare him to Mike Faist as Tony’s best friend Riff, who exudes a reckless energy that is exciting to watch.

Zegler was plucked from obscurity to play Maria and it’s clear to see why – she brings that wide-eyed innocence to the role and has a gorgeous singing voice. She has terrific support on the Sharks side from DeBose and David Alvarez, who can both really sing and dance and give raw, natural performances.

And we can’t forget Rita Moreno, who won an Oscar for playing Anita in the 1961 movie. She is delightful as drugstore owner Valentina, a reimagining of the character Doc.

If you want a film that is very similar to what you’ve seen before then Spielberg’s version will work for you, however, if you were hoping for a radical revisionist take, you’ll be disappointed.

In cinemas from Friday 10th December.