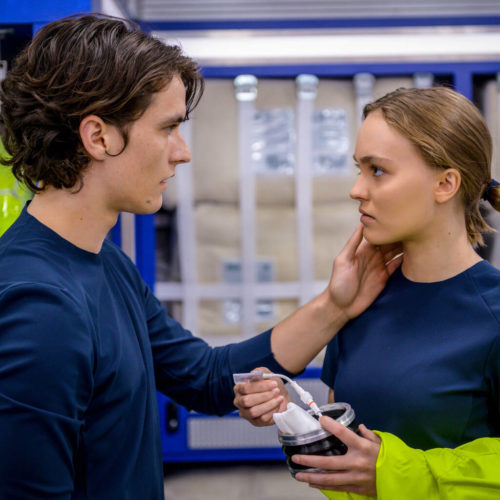 Verdict: Voyagers is essentially The Lord of the Flies in space and while it's exciting enough, a better story could have been told with the interesting premise

Tye Sheridan and Lily-Rose Depp try to restore order during a space mission after Fionn Whitehead leads a rebellion.

Ever wondered what would happen if you sent a bunch of teenage astronauts into space with no adult supervision? You can find out in Voyagers.

The sci-fi thriller, written and directed by Neil Burger, is set in the year 2063, when an exoplanet is discovered that could sustain human life, which is being threatened on Earth. The journey to the planet takes 86 years, so the astronauts who go on the scouting mission will be required to reproduce onboard and their grandchildren will be the ones who investigate the planet.

The mission leaders – including Richard (Colin Farrell) – decide to create children via genetic donors and raise them with the sole purpose of the mission. The journey begins when they are teenagers and it all goes smoothly until some of them realise their emotions and desires are being suppressed by “the blue”, a daily drink which keeps them docile and controllable. All hell breaks loose when they all stop taking the blue.

This film is essentially The Lord of the Flies in space – all sense of law and order are lost, they lose sight of the mission, and chaos reigns, with most of the teenagers giving into their darker desires and fighting, killing, and having sex. The evil Zach (Fionn Whitehead) leads the charge of the savage pack, who ignore the pleas of the sensible chief officer Chris (Tye Sheridan) and chief medical officer Sela (Lily-Rose Depp).

The set-up of the film is really interesting so it’s a shame Voyagers went in the direction it did and squandered its potential. While the storyline Burger went with is still watchable enough, you can’t shake the feeling that there was a better story that could have been told and themes that could have been explored with these characters and that premise.

Whitehead is a very convincing antagonist, a psychopath who is so charming that he manages to brainwash the majority into believing his every word and get them to follow through on his orders, no matter what. Sheridan and Depp do well as the voices of reason and the ones who try to get the mission back on track, although they know they have to get their hands dirty too to achieve their goal.

Voyagers has some solid thrills but it was ultimately too familiar and simplistic and the storyline wasn’t as strong as it could have been.