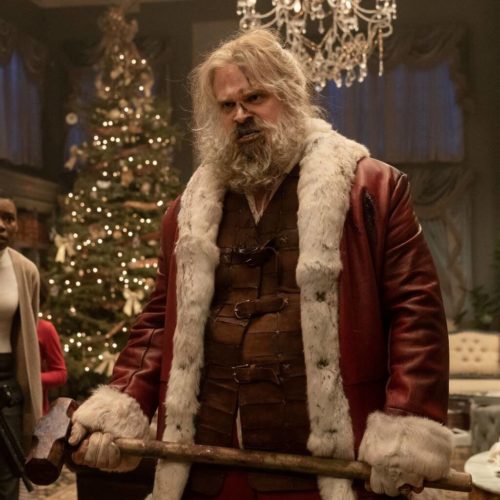 Verdict: If you like your holiday movies festive, fun and bloody, Violent Night is one of you.

Looking for your next John Wick fix? Then look no further than David Harbour as a formidable Santa in Violent Night.

The film is set on Christmas Eve at the luxury Lightstone mansion, where Jason Lightstone (Alex Hassell) and his estranged wife Linda (Alexis Louder) are spending the holidays with their daughter Trudy (Leah Brady), as well as his mother Gertrude (Beverly D’Angelo), sister Alva (Edi Patterson), her partner Morgan (Cam Gigandet), and their son Bert (Alexander Elliot).

A gang of mercenaries led by Scrooge (John Leguizamo) breaks into the mansion and holds the family hostage while they crack the safe, which is said to contain millions of dollars.

The criminals have meticulously researched their plan – but they could never have known that Santa Claus (Harbour) would be delivering presents upstairs at the time of the heist! He takes it upon himself to bring the baddies to justice and save Christmas.

The plot might remind you of another Christmas classic – Die Hard. But this time around, it’s Santa as the unexpected guest instead of John McClane. Just like Bruce Willis’ badass hero, Santa eventually makes his presence known by popping off villains.

There are other obvious movie influences – Santa seems to have a specific set of skills like John Wick, for example, and there is a brilliant sequence that pays homage to Home Alone’s lethal bobby traps.

Violent Night very much lives up to its name – the action is gruesome, bloody, and so brutal. So many people get killed off in an array of creatively gnarly ways with a range of surprising murder weapons. It is fun to watch with an audience and hear everyone gasping and cringing at the violence. There are a few inventive sequences that stand out but a couple of others felt repetitive and a bit dull.

The film is also hilarious. Harbour’s reluctant hero makes a lot of dark quips, the action always has a comic edge, and the bickering among the privileged family is amusing. The comedy aspect doesn’t work 100% of the time but it’s still entertaining.

Given the adult content, you might think Violent Night has no festive spirit, but that’s where you’d be mistaken. Trudy still believes in Santa and she forges a cute friendship with him over walkie-talkies. This helps him remember why his job is so special.

Harbour looks like he’s having a great time in this role. It makes no sense that his slovenly alcoholic Santa can pull off so much action – but his performance helps you forget that.

If you like your holiday movies festive, fun, and bloody, Violent Night is one of you.

In cinemas from Friday 2nd December.