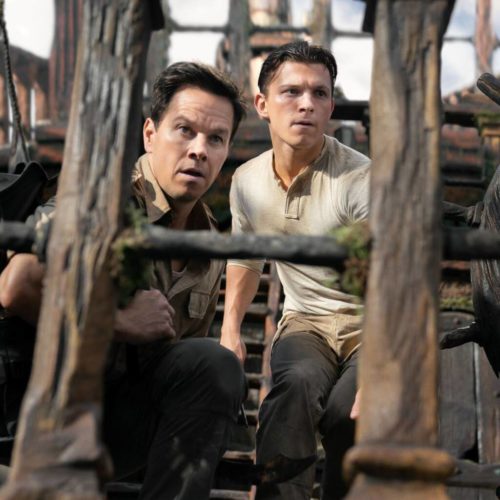 Verdict: Tom Holland and Mark Wahlberg work well together and bring the fun energy but the action scenes let it down

Tom Holland and Mark Wahlberg team up to find long-lost treasure in this movie adaptation of the popular video game series.

A movie adaptation of the Uncharted video game series has been in the works since 2008, with many different line-ups, but it has finally been made with Tom Holland and Mark Wahlberg.

Holland plays Nathan Drake, a barman and history enthusiast, who is approached by fortune hunter Victor ‘Sully’ Sullivan (Mark Wahlberg) about a quest.

Sully plans to find the lost gold from the voyages of Magellan and he needs Nathan’s help – he believes the clues about the gold’s location lies in the postcards Nathan receives from his long-lost brother Sam.

The treasure hunt isn’t as simple as that though, as the ruthless Moncada (Antonio Banderas) and his mercenary Braddock (Tati Gabrielle) are looking for the same gold and will stop at nothing to get there first.

Uncharted has some issues – it’s hard to care about or follow the quest – but it is surprisingly more entertaining than you might expect.

It could have easily been dull and generic but the leads inject lots of life and humour into it.

The film’s biggest success is the leads – they worked well together, had a solid mentor-reluctant mentee relationship, and it was fun watching them exchanging barbs and making quips.

Holland is as charming and appealing as ever and seemed perfect for Nathan, although he plays the role the same as his most famous character – Peter Parker.

Wahlberg does what he always does but that works for Sully, and the pair easily nail the physical stunts, as they have in previous action films.

Uncharted is described as an action-adventure, so it’s not good that it falls down with the action sequences.

A couple of the early ones – the auction heist and a parkour chase – are completely fine; the problem lies with the two outlandish setpieces.

These are ridiculous and rival Fast and Furious for breaking the rules of physics. You could probably suspend your disbelief and enjoy them if the CGI was better, but the green screen work is very obvious.

Just like last year’s Hitman’s Wife’s Bodyguard, Banderas is once against playing the over-the-top, one-dimensional villain, which is a baffling career choice.

Gabrielle as his right-hand woman Braddock is an equally shallow character and her motives are not fully clear.

Holland and Sully’s ally Chloe Frazer (Sophia Ali) – who has a confusing accent that fluctuates between British and Australian – is given a bit more to do but we could have done with more of her backstory.

So, Uncharted is not a complete failure – it has some moments of brilliance and Holland and Wahlberg were the right men for the job – but its action scenes are not to be taken seriously.