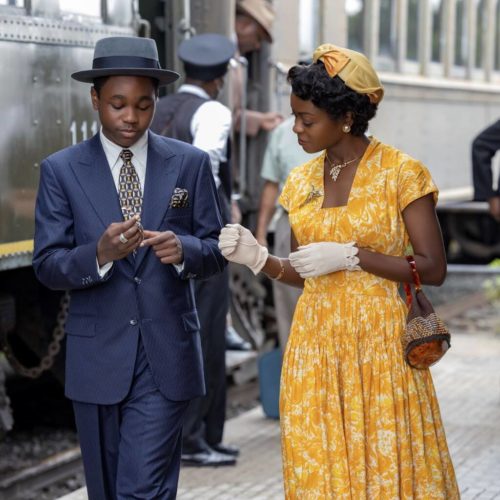 Verdict: Danielle Deadwyler is sensational as the formidable, inspiring Mamie Till-Mobley in this powerful, upsetting film

The tragic murder of Emmett Till is told from his mother Mamie’s perspective in Chinonye Chukwu’s Till.

Danielle Deadwyler is sure to be one of the names to watch out for this awards season thanks to her performance in Till.

Chinonye Chukwu’s hard-hitting drama tells the horrifying true story of Emmett Till (played by Jalyn Hall), a 14-year-old African-American boy who was brutally murdered for allegedly whistling at a white woman while visiting family in Money, Mississippi in 1955.

The film is told from the perspective of his mother Mamie (Deadwyler), who was at home in Chicago when the lynching took place, and follows the extraordinary decisions she made in the weeks after his death.

Till’s murder was barbaric and sickening – but don’t worry, we do not see what happened to him.

The murder is alluded to very briefly through sound and our imaginations can fill in the blanks.

However, while we are spared the violence, we do have to bear witness to his shockingly unrecognisable body – just like the real Mamie wanted.

She famously declared that she wanted the world to see “what they did to my baby” and held an open-casket funeral for her son.

Seeing the recreated body for the first time is difficult and upsetting, but it honours Mamie’s wishes and the focus is on Deadwyler’s heartbreaking face.

Till is a harrowing, anger-inducing watch at times, but it is also very inspiring.

Mamie was an unbelievably strong-willed woman who made tough decisions after the tragedy and became a very important figure in the civil rights movement.

Deadwyler fills her shoes with ease and does the formidable woman justice. Occasionally, her acting was slightly too big but she managed to rein it in and was most effectively moving when her emotions were conveyed in a subtle way.

Young newcomer Hall is adorable and charismatic as Emmett Till, Whoopi Goldberg portrays his caring and concerned grandmother, and Haley Bennett has a small but pivotal role as Carolyn Bryant, the woman who accused Till.

Till isn’t a movie to stick on if you want to watch something fun, enjoyable, or mindless – however, everybody should watch this important, powerful film and know what happened to that boy, especially if they weren’t aware of the story already.

In cinemas from Friday 6th January.