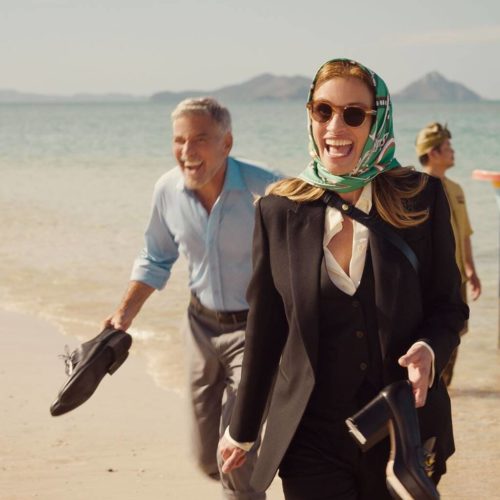 Ticket to Paradise follows a divorced couple that teams up and travels to Bali to try and stop their daughter from marrying a local man.

With all that’s happening in the world, we all need a bit of escapism from time to time.

And Ticket to Paradise, directed by Ol Parker from a script he co-wrote with Daniel Pipski, certainly fits the bill for easy afternoon viewing.

A vehicle for the superstar combo of George Clooney and Julia Roberts, who previously worked together on 2001’s Ocean’s Eleven and 2016’s Money Monster, this rom-com sees them take their signature snappy banter up a notch as former couple David and Georgia.

While the pair despise each other after a messy divorce, they are forced to put on a united front when their daughter Lily (Kaitlyn Dever) decides to stay in Bali, Indonesia after a vacation there with her boy-crazy pal Wren (Billie Lourd).

Yet, tensions rise between architect David and art dealer Georgia when they travel to the picturesque nation, only to find that Lily is serious about her plans to marry local seaweed farmer Gede (Maxime Bouttier), whom she has known for just a matter of weeks.

With little else to do, the duo decides to work together to sabotage the impending nuptials.

Unsurprisingly, Ticket to Paradise sticks with a tried-and-tested formula, which works to varying degrees.

David and Georgia’s fast-paced dialogue is a lot of fun, and their attempts at stopping the wedding are plenty entertaining, with a competitive match of beer pong proving to be a highlight.

But for whatever reason, it’s hard to buy the idea that the pair has romantic chemistry, and the much-publicised kiss scene is painfully awkward to watch – it’s sort of like accidentally seeing your super good-looking aunt and uncle smooch.

Luckily, there is some comic relief in the form of Georgia’s sweet pilot boyfriend Paul (Lucas Bravo), who shows up to try and spend some quality time with her.

Somehow, Paul gets some of the more memorable moments in the flick, with his one-liners and awkward attempts to impress his girlfriend particularly charming.

Kaitlyn and Maxime have a sweet dynamic, even if they have very little to do, while Billie had space to push her quirky character further.

The other star of the show is the scenery, with cinematographer Ole Bratt Birkeland’s cameras capturing the idyllic vistas, crystal clear waters, and rainforests of Queensland, Australia (made to resemble Bali due to Covid-19 restrictions) so beautifully that you’ll want to book a vacation immediately after stepping foot out of the cinema.

Certainly, there’s not much new to Ticket to Paradise, but the sparkling Hollywood star power balances out all of the tired rom-com tropes.

In cinemas from 16 September.