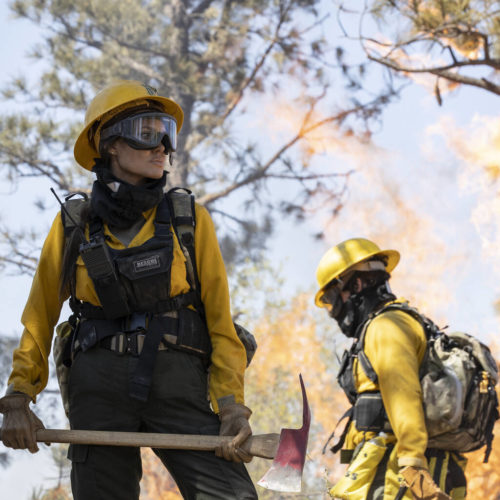 Those Who Wish Me Dead

Verdict: Those Who Wish Me Dead is thrilling, gripping, and tells a compelling story with an intriguing set of characters.

Angelina Jolie plays a firefighter who helps save a boy from assassins in this ’90s-style thriller.

Angelina Jolie doesn’t take on many acting projects these days, so the fact that she agreed to star in Those Who Wish Me Dead can only mean good things, right?

Jolie stars as Hannah Faber, a smokejumper who recently failed a psychiatric evaluation and has been taken out of action and sent to a fire lookout tower in the remote forest of Montana.

One day, she comes across a young boy named Connor (Finn Little), who has just witnessed his accountant father get murdered, and now, the two assassins, Jack (Aidan Gillen) and Patrick (Nicholas Hoult), are on his tail. Hannah helps protect the boy from the assassins and the massive wildfire they deliberately start.

Those Who Wish Me Dead is a straightforward and traditional thriller that feels like it belongs in the ’90s. This type of mid-budget thriller hardly ever gets made anymore or ends up on a streaming service rather than in the cinema, but this old-fashioned film serves as a reminder that these movies are good and more should be made.

The screenplay isn’t quite up there with Taylor Sheridan’s scripts for Hell or High Water and Sicario, but his direction is solid, the pacing is perfect, and the narrative played out well.

Jolie shines on the screen as Hannah, one of the boys who uses banter to cover up her troubles. The role is both emotionally and physically demanding – Hannah needs to be in incredible shape for her job – and Jolie nails the character on both fronts.

Although there were no issues with her performance, she’s almost too gorgeous to be convincing as the rough and ready Hannah and looks too made up and polished towards the end when she’s covered in mud, blood, and bruises.

She has great support from Jon Bernthal as the area’s deputy sheriff, Ethan, and Gillan as the menacing antagonist, but they are outshone by Little and Medina Senghore (as Ethan’s pregnant wife Allison) – Little does brilliant emotional work for such a young actor and Senghore gets the most surprisingly kickass role.

In contrast to Gillan, Hoult didn’t feel particularly deadly or threatening as you always knew Hannah could easily take him on.

Overall, Those Who Wish Me Dead is thrilling, gripping, and tells a compelling story with an intriguing set of characters.