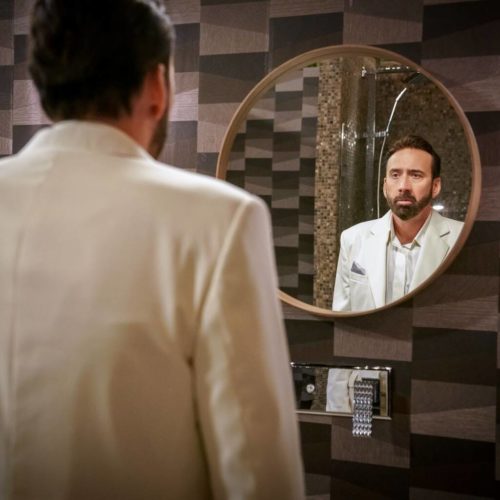 The Unbearable Weight of Massive Talent

Verdict: Nicolas Cage is excellent as the fictionalised version of himself but the film doesn't know what to do with him

Nicolas Cage has been taking on all manner of weird and wonderful roles of late and he’s outdone himself by playing the fictionalised Nicolas Cage in The Unbearable Weight of Massive Talent.

In Tom Gormican’s film, the fictional Nicolas Cage has been struggling to find work and hasn’t made a good film for years.

He’s desperate to make a comeback to restore his reputation and fix his money troubles.

Cage is also in the middle of divorcing Olivia (Sharon Horgan), the mother of his daughter Addy (Lily Sheen), who always came second behind his work.

In an attempt to pay off his debts, Cage reluctantly agrees to fly to Mallorca, Spain to hang out with rich superfan Javi (Pedro Pascal), who has paid $1 million for the pleasure of his idol’s company.

But all is not what it seems – Javi is believed to be involved in a kidnapping plot, so Cage is recruited by CIA agents Vivian (Tiffany Haddish) and Martin (Ike Barinholtz) to get inside information.

The concept of Cage playing himself – one that leans into the memes and the myths surrounding the actor – is genius and it generates plenty of amusing moments.

Unfortunately, it feels as if Gormican didn’t know what to do with his strong idea and it gets watered down by the average kidnapping saga.

The film has a strong beginning, exploring fictional Cage’s waning career and his desire for a comeback, but it becomes quite weak once the action moves to Mallorca and the story gradually gets less and less entertaining as the film progresses.

The final act is a particular letdown as it is very chaotic and over-the-top. It becomes all about the kidnapping plot that nobody cares about or has been following very well and it isn’t funny at all.

In addition, there are moments where our fictional Cage talks to a younger version of himself – yes, two Cages on-screen! – and while that is quite entertaining at first, it is used too much and the novelty wears off.

Diehard Cage fans will likely appreciate this film more than casual ones as it is filled with references to his work, from clips to memorabilia and much more.

The more knowledge you have, the more entertaining this movie will be.

Cage, the actor, leans into the absurdity of the piece and seems to be having a blast poking fun at himself.

Pascal and Horgan add their comedic talents into the mix, and Sheen – the daughter of Michael Sheen and Kate Beckinsale – brings the emotion.

There has been a lot of hype surrounding this action-comedy but it is a real mixed bag.

The film has some hilarious moments; it’s just a shame they’re within an overlong and average story.

In cinemas from Friday 22nd April.