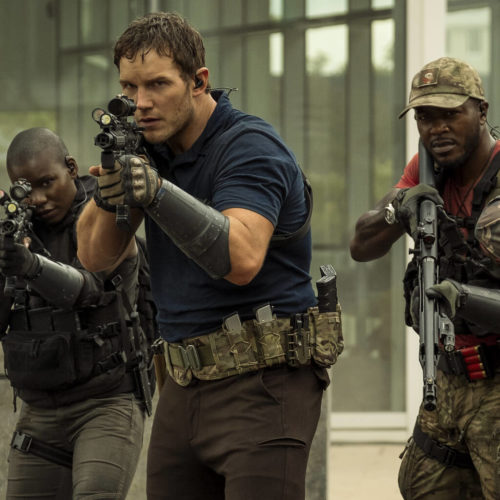 Verdict: This sci-fi blockbuster is an enjoyable enough one-time watch but it's generic, cliched and far too long

Chris Pratt volunteers to jump to 2051 to help people in the future stop aliens wiping out the human race.

Chris Pratt has become quite the Hollywood action man these days – and after proving his credentials with Guardians of the Galaxy and Jurassic World, he’s now taking on aliens in The Tomorrow War.

The film opens with the 2022 Qatar World Cup being interrupted by soldiers who emerge from the future and make a plea for help on the pitch.

The human race is about to be wiped out by aliens called the White Spikes and they want people to join them to fight in 2051. First military personnel steps up, then the global draft of civilians begins, and former soldier-turned-biology teacher Dan (Pratt) signs up to help save the day.

While there are plenty of action scenes involving really weird-looking aliens and a ridiculous amount of gunfire, there is much more to this sci-fi blockbuster.

It takes a lot of time to establish the world and build relationships between the characters, like Dan’s teammates Charlie (Sam Richardson) and Dorian (Edwin Hodge), and particularly between Dan and their colonel Muri (Yvonne Strahovski).

It cares about delivering on the human, emotional side as well as the thrilling action front.

However, the screenplay is generic, cliched, and offers us nothing we haven’t already seen before. It could have done with a few more moments of comedy or just some levity, especially given Pratt’s sitcom background.

Also, despite it laying down the groundwork with the characters, the emotional beats didn’t really resonate as they should and it was a struggle to really care about the outcome of events.

This isn’t helped by the meaty 2 hours 20 mins runtime – it really does go on a bit, especially towards the end.

Pratt is a capable leading man and a convincing action hero but it’s a shame he wasn’t able to use more of his charm and comedy chops as Dan was rather bland and too stoic.

Elsewhere in the supporting cast, Strahovski plays an important role and puts in a solid performance, but it would have been nice to see her in more action sequences, while Betty Gilpin was completely wasted as Dan’s stay-at-home wife. J.K. Simmons crops up in a few scenes and he’s always a welcome addition to any film, even if the role is small.

The Tomorrow War comes close to being good but doesn’t quite get there. It’s simply fine, although it is entertaining enough for a one-time watch.