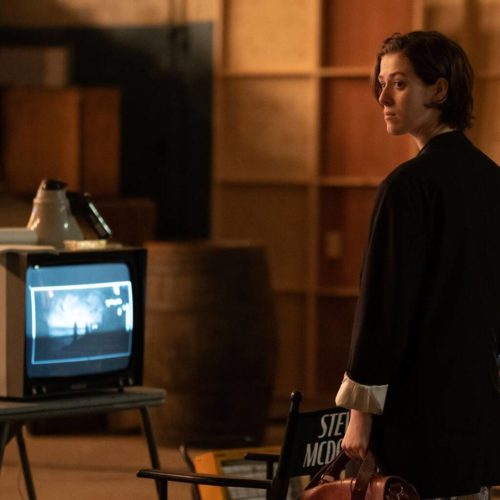 Verdict: This sequel is much lighter, funnier, more accessible and appealing compared to its difficult predecessor. Don't write it off!

Honor Swinton Byrne’s Julie makes a graduation film based on the troubled relationship she was involved in in the first film.

Joanna Hogg was inspired by a troubled relationship, and now, she has followed it up with a very meta sequel.

In the 2019 film, we saw film student Julie (Honor Swinton Byrne) in a troubled relationship with older man and drug addict Anthony (Tom Burke), a story based on writer/director Hogg’s personal experience.

Hogg goes one step further in the sequel by showing Julie making her graduation film about the relationship, which directly mirrors what she did with The Souvenir.

Following on from the events of the first film, Julie is now in mourning for Anthony and is trying to figure out how she didn’t know about his secret second life.

She explores her feelings with her graduation film, but she’s not thinking clearly so the production ends up being a chaotic mess.

For people who disliked the first Souvenir – never fear! This sequel is completely different – is it lighter, funnier, more accessible, and appealing.

The complicated and unpleasant relationship is over (for obvious reasons) and this is all about making the film.

Julie becomes a totally different character over the course of this film too.

She gains confidence in herself, finds her voice as a director and slowly comes out of her shell.

She rarely spoke in the first film but she gradually becomes this friendly, talkative person who has agency and knows who she is and what she wants.

It is refreshing to see Swinton Byrne flourish and play somebody other than the cold, sullen person we saw in the first film.

She is supported by an excellent array of characters, some of whom make a big impact on the comedy front.

James Spencer Ashworth is hilarious as Julie’s dad, Jaygann Ayeh is blunt and honest as her right-hand man Marland, and Richard Ayoade steals all of his scenes as the demanding diva director Patrick.

Swinton Byrne’s real-life mother Tilda Swinton is back as Julie’s mum – the scenes with Julie and her parents are delightful – while newcomers include Charlie Heaton, Joe Alwyn, and Harris Dickinson.

If the first film put you off checking this out, rest assured it is very different and so much easier to enjoy. The story is interesting and the characters will make you laugh constantly.

In cinemas from Friday 4th February.