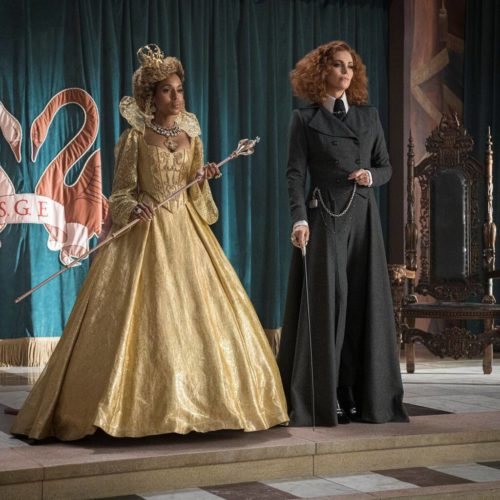 The School for Good and Evil

Verdict: The School for Good and Evil is a Harry Potter rip-off that's a case of style over substance

After making a name for himself with comedies such as Spy and Bridesmaids, Paul Feig has turned his attention to the fantsy genre with The School for Good and Evil.

The film, based on the novel by Soman Chainani, follows best friends Sophie (Sophia Ann Caruso) and Agatha (Sofia Wylie).

Sophie has long, blonde hair and is destined to be a princess, while Agatha dresses in masculine clothes and is accused of being a witch.

So, when they are kidnapped by a skeletal bird and taken to The School for Good and Evil, they are surprised when Sophie is dumped in Evil and Agatha is assigned to Good.

Their friendship is put to the test when Sophie is tempted to the dark side by villain Rafal (Kit Young).

Do you miss the Harry Potter movies? Well, the good news is that you can get your Potter fix right here.

It’s impossible to ignore how similar the films are – the School for Good literally looks like Hogwarts, there are training sessions where the students learn their magic, and the two schools are basically comprised of Gryffindors and Slytherins.

But it’s not just Potter – this movie borrows a lot from other fantasy stories, such as Wicked (a musical about friends separated by good and evil), Bridgerton (thanks to the School for Good’s sets and costumes), and Disney Channel movie Descendants, due to Sophie’s evil transformation.

Even if you ignore the derivative nature of the material, there are still many other problems – the rivalry between the two schools feels phoney, there are hardly any emotional stakes because the main villain is weak and the climactic fight between the schools is messy and hard to follow.

The movie is way too long (two hours 27 minutes), the CGI is dodgy at times, and there isn’t enough depth to the leads to make us care about them.

It is certainly a case of style over substance – but it is admittedly quite nice to look at.

There are other positives in there too – it’s quite entertaining watching Sophie strut around in her new goth looks when she goes to the dark side, the pop-filled soundtrack is top-notch, and a pumpkin-headed scarecrow is suitably scary.

It’s a shame the most recognisable names in the cast – also including Laurence Fishburne and Michelle Yeoh – are given so little to do outside of looking fabulous and playing a good or evil stereotype. Yeoh is particularly wasted as a beauty instructor.

Given that Chainani’s novel series contains six books, it can be assumed this is the beginning of a new young adult franchise – and what a shaky start it is.

On Netflix from Wednesday 19th October.