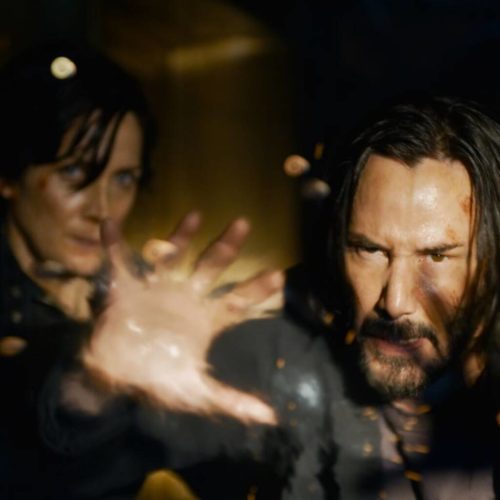 Verdict: The fourth instalment borrows too much from the original film and the action sequences aren't what they used to be

Eighteen years after the last film, director Lana Wachowski has struck out on her own to bring us more Neo and Trinity action.

Despite seemingly dying at the end of 2003’s The Matrix Revolutions, Neo (Keanu Reeves) is somehow alive once again. However, he’s living in the Matrix as Thomas Anderson, just like he did in the original film, but now he’s a successful game developer who has made a trilogy based on what happened in the first three movies.

He’s unsure whether his recollection of these events are memories or dreams – so he decides to discover the truth once again, this time with the help of Bugs (Jessica Henwick) and Morpheus (Yahya Abdul-Mateen II).

With the film beginning this way, Wachowski has to retread the story of the first Matrix quite significantly and it feels far too similar to the original in the first hour. It’s pitched as a sequel but feels more like a reboot as you see a lot of the same beats over again, albeit with a slightly different set of characters.

It takes a while to forge a new path and become its own thing, but even then, it never really got going and fully clicked into place. It only became awesome in the last 10-15 minutes – but then it stops! The game-changing moment is essentially a teaser for a sequel that is most definitely going to happen.

The Matrix movies have always focused on the central love story between Neo and Trinity (Carrie-Anne Moss) but that element has stepped up a notch and become even more important. It was nice to see Reeves and Moss back together, bringing the emotional layer to the story.

As always, the film is complicated and tricky to follow and characters are often dumped with exposition, with the unlucky ones being Sati (Priyanka Chopra) and Niobe (a skilfully aged Jada Pinkett Smith). The films aren’t known for their humour, but there were a few funny moments, particularly in the meta scenes where game developers discuss The Matrix trilogy (the games, not the films) and making a fourth instalment.

The action sequences in the original trilogy were revolutionary, jaw-dropping and iconic so it’s a shame they are lacklustre and less memorable this time around. They mostly didn’t show us anything we hadn’t already seen before and didn’t have a standout ‘wow’ moment. It doesn’t help that Thomas/Neo is older, has mental health struggles and is not as capable as he once was.

Elsewhere in the cast, Henwick is great new addition as the cool captain Bugs and Neil Patrick Harris does some unexpected and interesting work as Thomas’ therapist. Mateen II was the perfect choice to replace Laurence Fishburne as Morpheus – he nails the voice and line delivery and has a terrific array of colourful suits. He’s not in it anywhere near enough though.

The only disappointment was Jonathan Groff as he didn’t feel like the right choice for his particular role (no spoilers!) and his portrayal didn’t work.

Taken as a whole, The Matrix Resurrections isn’t satisfying as a standalone piece because it feels like it’s just laying the groundwork for another, better movie. It ends in a very exciting place though so that should give us hope for the next one.

In cinemas from Wednesday 22nd December.