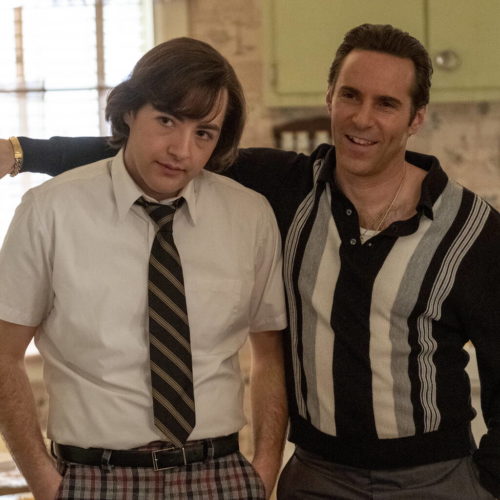 The Many Saints of Newark

Verdict: The Many Saints of Newark is not without flaws, but the strength of its TV source material carries it through.

Tony Soprano’s origin story is shown in The Many Saints of Newark.

There’s something cyclical about The Sopranos, the show that ushered in the golden age of TV, heading to the big screen as the new film The Many Saints of Newark.

David Chase’s creation showed cinema’s scope could be brought into American homes in a way that would be key to streaming services’ successes with prestige TV.

With this feature-length version, co-written by Chase and directed by series veteran Alan Taylor, it finally makes the return journey to movie theatres.

Although it’s a prequel set in the 1960s and early 1970s New Jersey, initially during the 1967 Newark riots, The Many Saints of Newark also has a certain circularity, as, like The Sopranos, a major underlying theme is how the sins of a previous generation are reflected in the next – a point hammered home by an opening scene narrated by melancholic mob boss Tony Soprano’s murdered ‘nephew’ Christopher Moltisanti.

However, the film isn’t centred on young Tony, portrayed as a teen by Michael Gandolfini, son of original actor James, but his honorary ‘uncle’ and Christopher’s dad, Dickie Moltisanti (Alessandro Nivola).

With Tony’s own father Johnny (Jon Bernthal) jailed for an arrest originally shown in a flashback on the show, Dickie becomes a tough guy father figure to the gawky teenage miscreant as he looks for purpose in life.

Beneath his suave Jersey demeanour, Dickie has his own demons, mainly stemming from his fraught relationship with his own father Aldo (Ray Liotta) – an ageing mid-level gangster known as ‘Hollywood Dick’ who has recently brought a beautiful new young wife (Michela De Rossi) back from Italy.

His attempts to establish himself are made more difficult though by his employee-turned-rival, aspiring African-American crime lord Harold McBrayer, who Leslie Odom Jr. plays with echoes of Denzel Washington’s portrayal of American Gangster‘s real-life drug trafficker Frank Lucas.

We also get some important (and funny) character-establishing moments for The Sopranos‘ supporting cast and the inevitable references to gangster movies including Goodfellas and The Godfather – and even the noir classic Key Largo.

One problem with the film is its main plot. It’s pretty boilerplate “rise in the business, lose your soul” gangster fare, despite a strong central performance from Nivola and an unflinching depiction of America’s racial tensions.

Like the show, it features scenes of troubling violence, but there’s not a series to build up pathos, so they can just seem grotesque.

A weak main story would leave most films sleeping with the fishes, but The Many Saints of Newark gets away with it because its main attraction is in its B-plot – the sadness and family mistakes at the heart of Tony’s career choice, ones eventually psychoanalysed over six glorious seasons.

It’s also got some killer lines in the script, a thumpingly cool score punctuated by contemporary hits, and a cast who don’t miss a beat even when taking on its thinner material.

Therefore, while The Many Saints of Newark may not be Chase’s latest masterpiece, it’s still plenty of fun for Sopranos completists and newbies alike.

In cinemas from Wednesday 22nd September.