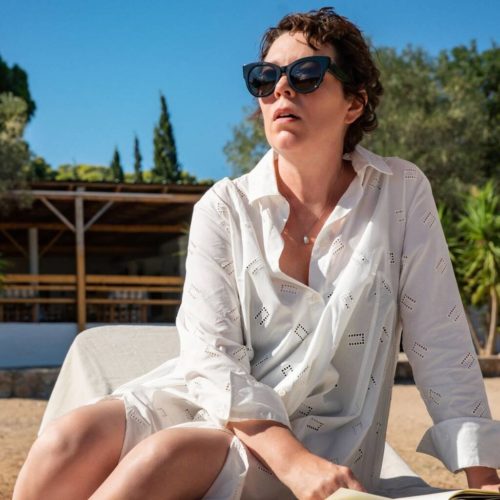 Verdict: Olivia Colman is a sure-fire bet for another Oscar nomination for her quietly heartbreaking performance in this radical motherhood story

Olivia Colman plays an academic who becomes intrigued by another family while on holiday in Greece.

The drama stars Olivia Colman as Leda Caruso, a comparative literature professor who is on a working holiday on a Greek island.

She heads down to the beach every day to work and has to share the shoreline with a loud and obnoxious American family.

Leda becomes increasingly intrigued by young mum Nina (Dakota Johnson) and her daughter and this makes her think about the difficult choices she made as a mother in the past.

Not much happens in The Lost Daughter – it is a slow-burning character study that explores Leda’s psyche. We don’t find out what is troubling her for a long time and that mystery felt very intriguing and compelling.

The layers are slowly peeled back through flashbacks starring Jessie Buckley as a young Leda.

The film jumps back and forth between past and present to slowly piece together her story, and while the ultimate reveal packs a punch, the story feels like it’s lacking something.

Some viewers may find the ending unsatisfying as they expected more to happen and for it to reach a more climactic conclusion.

The film deserves praise in other areas though. Gyllenhaal realistically depicts how stressful and maddening being a mum can be and successfully puts you in Leda’s shoes so you can understand why she made her decisions.

The Lost Daughter tells a searingly honest story about a taboo side of motherhood that is rarely portrayed on film and it feels subversive and radical.

The performances are the movie’s biggest strength. Colman is a sure-fire bet for another Oscar nomination for her work here.

Her performance isn’t big or showy but it feels real and is heartbreaking in an understated way. You can feel the guilt and shame Leda has carried around with her for many years.

Buckley is also fantastic as the permanently harassed mother who is trying to juggle two kids and academic study.

Johnson is captivating as Nina; the camera is drawn to her just like Leda is.

On the surface, it might seem like she was cast simply because of her stunning appearance but there’s so much more to her than that and this becomes clear as the film progresses.

The Lost Daughter won’t be for everyone as it is so leisurely paced and the subversive look at motherhood won’t sit right among some. But it’s worth a watch for the performances and Gyllenhaal’s assured direction.

On Netflix from Friday 31st December.