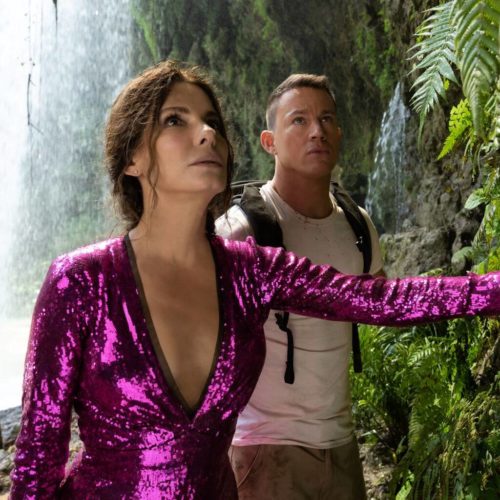 Verdict: The Lost City is so much fun and one of the most entertaining films so far this year

Sandra Bullock plays a romance novelist who is kidnapped and taken to a remote island by a deranged billionaire.

If you love old-fashioned action-adventure romantic-comedy films like Romancing the Stone and The Mummy, then The Lost City is the movie for you.

It tells the story of reclusive novelist Loretta Sage (Sandra Bullock) who is forced to come out of hiding to promote her new romance-adventure novel, the latest tale revolving around hunky hero Dash, who is portrayed by cover model Alan (Channing Tatum).

After the first disastrous stop on her book tour, Loretta is kidnapped by billionaire Abigail Fairfax (Daniel Radcliffe), who has discovered a lost city on a remote island in the Atlantic Ocean.

He is convinced Loretta based her novel on the research she conducted with her late archaeologist husband and he wants her to help him find the Crown of Fire.

Alan, channelling his heroic alter ego, launches a rescue mission to save Loretta from the island with the help of action man Jack Trainer (Brad Pitt).

The Lost City is one of the most entertaining films so far this year. It’s so much fun!

There hasn’t been a feel-good, silly action-adventure romantic-comedy in a really long time and it almost makes you feel nostalgic for movies like this from the ’80s and ’90s.

The film is full of laugh-out-loud moments thanks to a strong script and Bullock and Tatum’s amazing comedy partnership.

They have excellent banter and chemistry and make the film as enjoyable as it is.

Neither of them is afraid of looking like a fool to get a laugh and make a scene as funny as possible.

It’s so nice to see Bullock showing off her comedy chops once again and getting involved in silly set-pieces that hark back to her Miss Congeniality and The Proposal days.

Tatum’s Alan has the best of intentions with his rescue mission but he’s a bit of an airhead and makes a lot of mistakes.

It’s refreshing to witness a strong, hunky actor like Tatum play someone so stupid. He has no problem being the butt of the joke and this is very endearing.

He has to rely on Pitt’s capable character, who is hilarious but sadly only in the film for a short time.

Radcliffe seems to be having great fun as Abigail, a villain who isn’t particularly threatening at all – he just has money, resources, and plenty of henchmen.

The rest of the supporting cast are entertaining too, from Da’Vine Joy Randolph as Loretta’s despairing publicist, Patti Harrison as her odd social media manager, and Oscar Nunez as a weird pilot who helps with the rescue attempt.

There hasn’t been a film that successfully ticks all the action, adventure, romance, and comedy boxes in a long time and hopefully, The Lost City will encourage more to be made.

In cinemas from Wednesday 13th April.