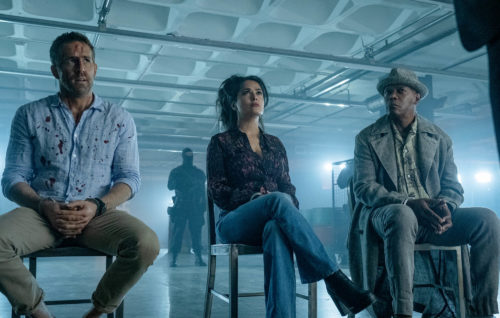 Verdict: This sequel is lazy, loud, excessive, cliched and incredibly over-the-top, shame on all involved

Ryan Reynolds, Samuel L. Jackson, and Salma Hayek return for more action hijinks in the follow-up to the 2017 original.

The Hitman’s Bodyguard received mixed reviews from critics when it was released in 2017 but made a decent chunk of money at the box office, so it’s no surprise that a sequel was given the green light.

Following on from the events of the original, The Hitman’s Wife’s Bodyguard, once again directed by Patrick Hughes, begins with Michael Bryce (Ryan Reynolds) coming to terms with losing his AAA security licence and taking a much-needed break.

However, his peace is interrupted when con-woman Sonia Kincaid (Salma Hayek) tracks Bryce down and asks for his help rescuing her husband, hitman Darius Kincaid (Samuel L. Jackson), who has been taken by mobsters.

Complicating matters further, they are all captured by Interpol agent Bobby O’Neill (Frank Grillo), who forces them to take down shipping tycoon Aristotle Papadopoulos(Antonio Banderas), a criminal mastermind planning to destroy the European power grid.

The first film was loud, over-the-top, and all over the place and this sequel is basically more of the same, with the biggest difference being that Hayek has a leading role instead of a minor one like before.

It is brash, violent, messy, and excessive and it feels like Hughes decided to go for quantity over quality and threw in every idea, cramming in as many shootouts, explosions, and swear words as possible into this movie.

The script is weak and relies too heavily on the belief that people yelling expletives at each other is funny, when in actual fact, the novelty wears off pretty quickly. The story is extremely silly, cliched, and lazy and is simply just a basic framework on which to hang all the yelling, insults, profanity, and action sequences.

Reynolds carries the movie doing exactly what you’d expect him to do because he doesn’t really do any other kind of acting these days. He is the funniest cast member, possibly because his brand of humour is different from that of his co-stars.

Hayek’s Sonia is larger-than-life, loves to yell, and can be quite funny, and the actress deserves praise for throwing herself into the role, which can’t be said for Jackson, who phones it in.

It made no sense for Banderas to be cast as a Greek character when he sounds so obviously Spanish but his outfits were fabulous and he was a suitably camp villain.

The Hitman’s Wife’s Bodyguard is lazy, cliched, and filled with stereotypical one-note characters and action sequences that are edited in a messy way. It’s best to switch your mind off before going in.

In cinemas from Monday 14th June.