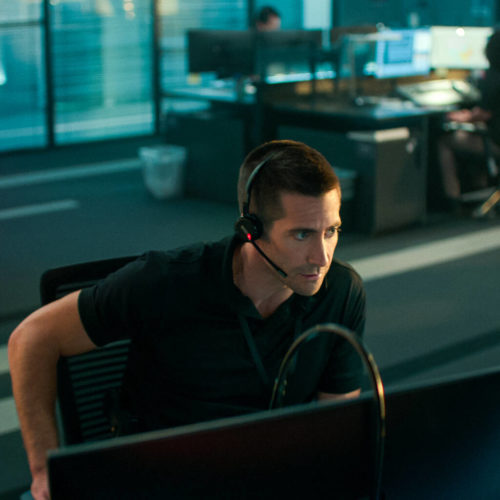 Jake Gyllenhaal plays a 911 police dispatcher who receives a call from a possible kidnap victim in this tense thriller.

Gustav Moller’s Danish film The Guilty received critical acclaim back in 2018 so it was only a matter of time before it got the Hollywood remake treatment.

Moving the action from Copenhagen to Los Angeles, this remake stars Jake Gyllenhaal as Joe Baylor, a troubled police detective who has been relocated to the 911 police dispatch office while he awaits the outcome of a mysterious hearing.

During his shift, he receives a call from Emily Lighton (voiced by Riley Keough) who claims she has been abducted and is in a white van. Baylor becomes deeply invested and tries to do everything in his power to save Emily while relegated to a desk.

The Guilty is a pacy, intense thriller that gets increasingly more gripping as it goes along. Given that it’s set in real time in one location with one character – we’re basically just watching Baylor taking calls at his desk – you might think it’ll get boring, but that doesn’t happen because the writing is so good. You can’t help but become more engrossed in the story as we’re drip-fed more information about the case and Joe’s past across a variety of phone calls. There are plenty of twists and turns along the way to keep you hooked.

With such a stripped-back production and basically only one person on screen, Gyllenhaal’s performance had to be perfect and he doesn’t disappoint. He easily carries the responsibility of being on-camera the entire time. He gives a raw, emotional, and stressed-out performance and Baylor’s behaviour becomes increasingly more erratic as the situation escalates. He has a lot of personal issues to contend with too and he takes his anger out on his colleagues and callers, making very unprofessional choices.

The film wouldn’t work without the voice cast and they fully commit to their roles, with Keough genuinely sounding like a terrified woman trapped in a moving van despite recording her part at home with a remote recording device. There are also impressive voice appearances from Peter Sarsgaard, Da’Vine Joy Randolph, and Eli Goree, while you may also recognise the voices of Ethan Hawke and Paul Dano on the other end of the phone.

In this regard, the sound design team also deserves praise for blending it all together and making the voice actors sound like where their characters should be.

If you’ve seen the Danish version, then this remake won’t have the same effect because you’ll know what is coming, but newcomers to the story will likely be on tenterhooks the entire time. Whichever camp you’re in, The Guilty is still an intense thrill ride that is simple but very effective.