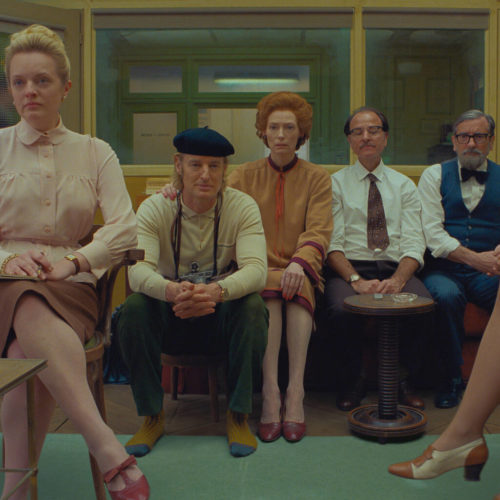 Verdict: This eccentric and whimsical comedy is a classic case of style over substance but it's still an amusing watch

Wes Anderson brings his signature style to a star-studded comedy anthology about journalists.

It brings to life three of the magazine’s stories: The Concrete Masterpiece, by J.K.L. Berensen (Tilda Swinton), about a prisoner named Moses (Benicio del Toro) who becomes a famous artist by painting his guard Simone (Lea Seydoux); Revisions to a Manifesto, by Lucinda Krementz (Frances McDormand), who profiles a student revolutionary named Zefferelli (Timothee Chalamet), and The Private Dining Room of the Police Commissioner, by Roebuck Wright (Jeffrey Wright), who recalls the time he got caught up in a kidnapping plot while having dinner with the police commissioner.

While the concept and structure of this eccentric, whimsical comedy are commendable, none of the stories really deliver the goods enough to create a satisfying whole.

They don’t really amount to much and often feel like a case of style over substance as they were delightful to look at but so frustratingly lightweight.

Although the stories are shallow and inconsequential, there’s no denying they’re still very amusing and Anderson has created some solid comedic moments and hilarious lines of dialogue with his signature flair for absurdity and silliness.

On a style level, Anderson is in his element and experiments with many technical visual flourishes, such as switching from black and white to colour, from live-action to animation and freezing chaotic action shots to make them appear like a tableau.

The film’s appearance is exactly what you’d expect from an Anderson outing and the movie should be praised for elements like costume and production design, the snappy editing, onscreen illustrations and Alexandre Desplat’s suitably jaunty score.

The filmmaker has assembled an impressive cast list for this film, with many other returning collaborators, such as Bill Murray, Adrien Brody, and Owen Wilson, showing up too.

Some of his usual suspects also just pop up for brief appearances, so keep an eye for actors including Willem Dafoe, Edward Norton, Saoirse Ronan and Jason Schwartzman.

Although The French Dispatch isn’t one of Anderson’s strongest films, by quite a stretch, it’s still an enjoyable and delightful watch with fun A-list performances.