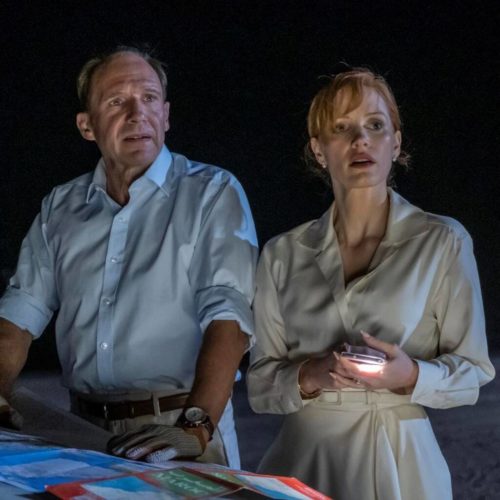 Verdict: The Forgiven boasts a brilliant screenplay and performances but the pacing and ending let it down

Ralph Fiennes and Jessica Chastain play a wealthy couple who get involved in an accident on the way to a party in the Morocco desert.

Considering the A-list ensemble in John Michael McDonagh’s The Forgiven, it seems to have flown under the radar. Here’s all you need to know about the new drama.

The Forgiven tells the story of unhappily married couple David and Jo Henninger (Ralph Fiennes and Jessica Chastain), who accidentally hit and kill a young Moroccan boy while driving to a raucous party at their old friend Richard (Matt Smith)’s holiday home in the Sahara Desert.

While the local authorities seem happy to rule it an accident and sweep the incident under the rug, the boy’s father Abdellah (Ismael Kanater) turns up at the villa and demands that David returns with him to his village so he can be present when the boy is buried.

After David agrees to respect this custom, the film is split in two and switches back and forth between his tense journey with the intimidating Abdellah – is he going to kill him? – and the rich (mostly) white people living it up at the fancy soirée.

The experience is transformative for David and his character’s journey is very well written.

He begins as a cynical, cold alcoholic who looks down upon everybody and doesn’t hold back with his controversial un-PC views but he becomes a changed man over the course of the movie.

McDonagh’s screenplay is smart, very adult and delivers a loud and clear message about Western ignorance and privilege.

It is darkly funny and you will probably chuckle at the audacity and rudeness of some of the guests, which include Richard’s boyfriend Dally (Caleb Landry Jones), mysterious American Tom (Christopher Abbott) and posh Brit Lord Swanthorne (Alex Jennings).

The Forgiven is a slow-burning grown-up drama that would usually get a release on a streaming service or made into a miniseries rather than opening in a cinema these days.

It’s not a surefire success though because of its restrictive 18 rating and since the narrative moves slowly and feels longer than it is, perhaps because it cuts back and forth between the two locations too many times.

The story always feels like it’s building towards something huge so the ending feels abrupt, anticlimactic, and unsatisfying.

Fiennes is the star of the show as he gets some terrifically awful lines of dialogue to say and David is a pretty terrible human, but you will be drawn to Chastain in a charming and seductive role as the wife who gets up to mischief of her own while her husband’s away.

The standout supporting stars are Smith as the flamboyant Richard, Mourad Zaoui as his employee Hamid – it’s fun to see their antics through his eyes – and Saïd Taghmaoui as Abdellah’s friendly right-hand man Anouar.

The Forgiven has many redeeming qualities – particularly the performances and the screenplay – but it’s let down by the pace, length, and ending.

In cinemas from Friday 2nd September.