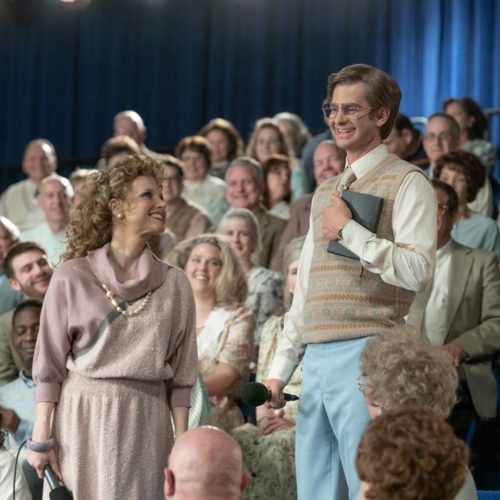 The Eyes of Tammy Faye

Jessica Chastain has certainly proven her versatility this year – we recently saw her as a badass spy in The 355, and now, she has transformed into a televangelist for The Eyes of Tammy Faye.

Based on the 2000 documentary of the same name, Michael Showalter’s biopic gets going in earnest when Tammy Faye (Chastain) meets Jim Bakker in college and they get married in 1961.

They drop out to become travelling preachers and find success with their touring children’s puppet show.

TV eventually comes knocking and they’re offered their own show, which they eventually ditch in order to create their own television network, Praise the Lord (PTL).

PTL becomes a phenomenon in the ’70s, making the Bakkers the most recognisable and popular televangelists in America. But it wouldn’t be an interesting story if it all went smoothly, and unsurprisingly, a scandal brings it all crashing down in the late ’80s.

This is a standard, generic biopic that essentially runs through all the main points in their Wikipedia entries.

Certainly, it will still be fascinating to people who haven’t seen the documentary or don’t know much about the Bakkers because the true story is very interesting.

However, you won’t come away knowing the characters in a particularly deep way as it glosses over a lot of the scandalous details and never truly answers why they did what they did and their true feelings about it.

The film itself may be pretty conventional, but Chastain’s transformative performance sure is not.

She sometimes looks unrecognisable thanks to all the wigs, prosthetics, and make-up she has to wear – Tammy Faye liked to load on the cosmetics – and this can admittedly be distracting at times.

But if you take away the shallow side of the performance, Chastain still does a terrific job giving Tammy Faye heart, optimism, and positivity even in the face of scandal.

She’s not innocent and the shine eventually comes off but she is surprisingly progressive for her time – she fights to be given the same respect as her husband and uses her platform to support the LGBTQ community.

Garfield is equally impressive as the charming and captivating showman who lets his hunger for success get the better of him – but Chastain’s flashier turn steals the show.

The Eyes of Tammy Faye may not reach below the surface of the lead characters but it’s still a solid watch thanks to the shocking true story and lead performances.

In cinemas from Friday 4th February.