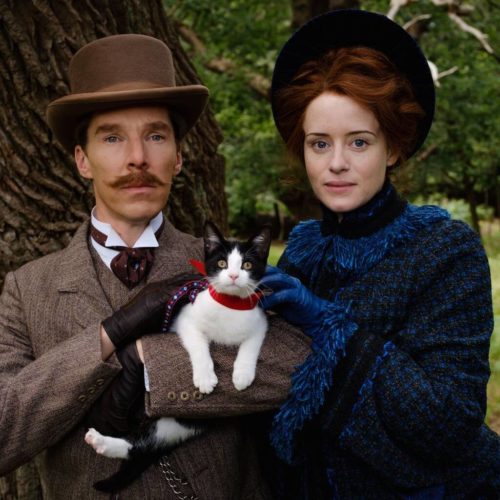 The Electrical Life of Louis Wain

Benedict Cumberbatch is showing off his range by playing two very different characters in quick succession – a mean cowboy in The Power of the Dog and an eccentric painter in The Electrical Life of Louis Wain.

Will Sharpe’s biographical comedy-drama takes place between the 1880s and 1930s and depicts the highs and lows of Wain’s life.

It begins with the newspaper illustrator struggling to provide for his family – his mother and five sisters – following his father’s death.

He hires a governess named Emily Richardson (Claire Foy) to help look after and educate his sisters and falls madly in love with her, causing scandal as she is of a lower class.

Ignoring the whispers, Wain and Richardson get married. One day, they take in a stray kitten, an unusual pet in Victorian times, and call it Peter.

The feline becomes something of a muse to Wain and sparks his long-running passion for making paintings of anthropomorphic cats.

The artist suffered a lot of tragedies in his life and the film could have easily been quite dark and depressing but Sharpe manages to maintain a frivolous and light-hearted tone.

This tone is maintained by Olivia Colman’s chipper narration; she keeps the film moving at a brisk pace so we never dwell on the sad moments and her charming script will give you a few chuckles.

The whole film is funnier than you might expect, given the subject matter, and was constantly amusing and occasionally laugh-out-loud hilarious, particularly in scenes featuring lots of cats and cat subtitles!

Wain is a peculiar and quirky chap and Cumberbatch convincingly channels his nervous, awkward energy. You can’t help but feel sorry for him bearing the burden of his entire family.

He is endearing in a bizarre kind of way and Cumberbatch and Foy made a solid partnerships of like-minded oddballs.

Andrea Riseborough plays the oldest Wain sister Caroline, a thorn in the painter’s side. She’s constantly berating him about their finances, even though he’s trying his best.

This isn’t your average biographical drama – it’s a bit whimsical and as quirky as its lead character. A must-see for feline fans!

In cinemas from Saturday 1st January.