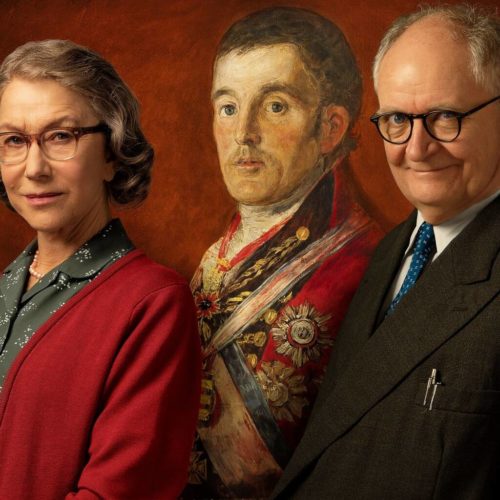 Verdict: This is an entertaining, whimsical, feel-good film with a delightful turn from Jim Broadbent

The Duke originally premiered at the Venice Film Festival in September 2020, and after multiple delays, it is finally being released in cinemas.

Roger Michell’s last film is a comedy-drama which tells the true story of Kempton Bunton (Jim Broadbent), an eccentric fellow who is always campaigning for social justice and on his soapbox about his latest cause, such as free TV licences for OAPs.

His outspoken and chatterbox nature often gets him into trouble at work and he struggles to hold down a steady job and provide for his family, something which often frustrates his long-suffering wife Dorothy (Helen Mirren).

In the 1960s, Bunton was put on trial accused of stealing Francisco Goya’s painting of the Duke of Wellington from London’s National Gallery, hiding it in his home in Newcastle, and then voluntarily bringing it back.

Since the remarkable true story is so bizarre, it made perfect sense for Michell to give his film a whimsical, light-hearted feel.

It has moments of seriousness but they don’t last for long and it’s very entertaining and funny. The film is only 96 minutes long and you’ll be sure to exit the cinema with a smile on your face.

Broadbent is the main reason for that. He is in delightful form as the endearing Kempton. You can’t stop yourself laughing at or with him as you watch his cheeky antics, outspoken no-filter nature, and excellent turn of phrase.

Mirren’s Dorothy is very different from Kempton. She is serious, sullen and more openly grieving their child, a loss they don’t discuss.

You can tell that living with Kempton has been testing her patience and giving her a headache for years and she just wants him to stop his “nonsense”.

There are more recognisable faces in the supporting cast too – Fionn Whitehead brings more mischief as their son Jackie, who gets involved in the painting plot.

Michell was able to present The Duke at Venice in 2020 but passed away last year before it got a general release.

The Notting Hill director has once again made a feel-good, heartwarming movie – a perfect way to end his filmmaking legacy.

In cinemas from Friday 25th February.