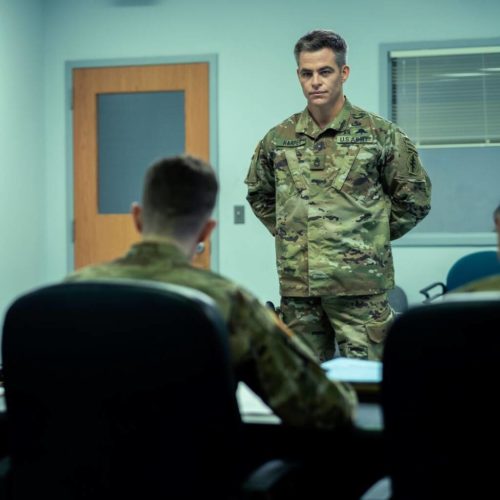 Verdict: Chris Pine delivers a solid performance but this action-thriller needed to do more to offer us something new

Chris Pine plays a former Special Forces Sergeant who joins a private underground military force after being discharged from the Army.

The title The Contractor doesn’t sound like an exciting action-thriller but rest assured the film is not as dull as the name would suggest.

In Tarik Saleh’s new movie, Chris Pine portrays Special Forces Sergeant James Harper, who is involuntarily discharged from the Army and cut off from his pension.

He agrees to work for a private underground military force organised by Rusty (Kiefer Sutherland) and for his first mission, James and Mike are sent to Berlin to eliminate a threat to national security.

When the mission goes awry, James finds himself separated from Mike and hunted by unknown assailants.

With no idea what’s going on, he has to get to the bottom of the conspiracy and figure out a safe way to return home.

There have been so many movies about an operative being betrayed mid-mission and The Contractor, unfortunately, adds nothing fresh or new to the mix.

After spending a bit too long setting up the story, the narrative heads to Berlin and you can soon tell that something’s off and develop a suspicion that the mission isn’t going to go smoothly – and you’d be right!

Once everything goes wrong, the film turns into more of a standard action-thriller as James has to go on the run, with people trying to kill him at every turn.

J.D. Davis’ script needed to do more to really sell the story and make it better than average.

We needed more background about James’ life and time in the Army and the dialogue after the mission goes awry is hard to follow.

We end up just as confused as James is – but perhaps that’s the whole point.

Pine and Foster – reuniting after 2016’s Hell or High Water – come out of the film unscathed as their performances are strong, despite the material.

They make it watchable and Pine humanises a character who could have easily been a mindless, robotic gun-for-hire.

The Contractor is unoriginal and predictable but it’s not a complete write-off thanks to Pine and Foster, the action sequences, and the gripping final act.

Streaming on Prime Video from Friday 6th May.