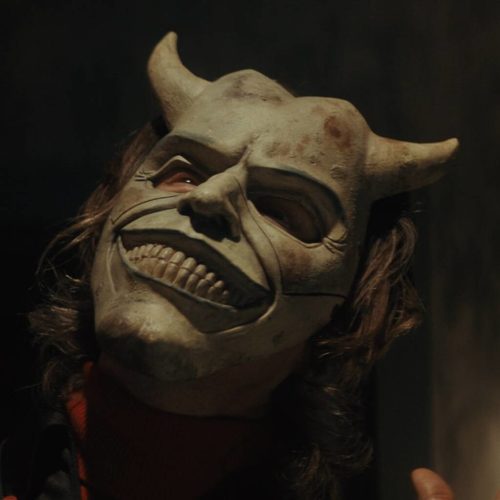 Verdict: The Black Phone isn't particularly scary but it tells a solid, thrilling story and features a chilling performance from Ethan Hawke

After getting a taste of playing a villain in Marvel TV series Moon Knight earlier this year, Ethan Hawke has one-upped himself by playing a serial killer in Scott Derrickson’s The Black Phone.

This supernatural horror, also co-written by Derrickson, is set in North Denver in 1978.

The neighbourhood is on high alert as five schoolchildren are missing and rumour has it “The Grabber” is behind all the disappearances.

His sixth victim is Finney Shaw (Mason Thames), who gets locked up in The Grabber’s sparse basement, which contains nothing except a bed, toilet and a black phone on the wall.

The phone has been disconnected for years, but somehow, The Grabber’s past victims are able to communicate with Finney through it and help him try to escape his captor’s clutches.

The Black Phone feels like a Stephen King movie adaptation – and there’s good reason for that. It is based on a short story written by Joe Hill, King’s son.

The story feels reminiscent of the It movie adaptations, particularly since it focuses on children going up against evil.

Those going into the film expecting a horror containing tons of jump scares and gruesome moments may come away disappointed.

All the best scary bits are in the trailer and there are only a few in it as it is. It is best to think of this film as a thriller with a couple of scares.

Regardless of its failings as a horror, the story is well-written and compelling and you feel invested trying to figure out the mystery of where Finney is being held captive.

However, it felt like it needed more to bring it to the next level and make it great.

It would have been nice to know more about The Grabber – his name, backstory, any nugget of detail would have been appreciated – but the character being so unknown to the viewer makes him more chilling.

Hawke has spent many years being known for his good, likeable characters in films like Dead Poet’s Society and Before Sunrise, so it is refreshing but also rather disconcerting to see him playing such a scary, hideous character.

We never get to see his full face as The Grabber obscures his identity using a variety of creepy masks.

Hawke’s performance is pitched perfectly and he has a menacing, unsettling presence – but the masks do a lot of the heavy lifting for him.

Thames does a decent job as Finney, but the best child star in this is easily Madeleine McGraw as his onscreen sister Gwen.

She steals the show with her excellent line delivery and has a more significant role than expected.

While it may not be an effective horror, The Black Phone still tells a solid, thrilling story with an discomforting lead performance from Hawke.