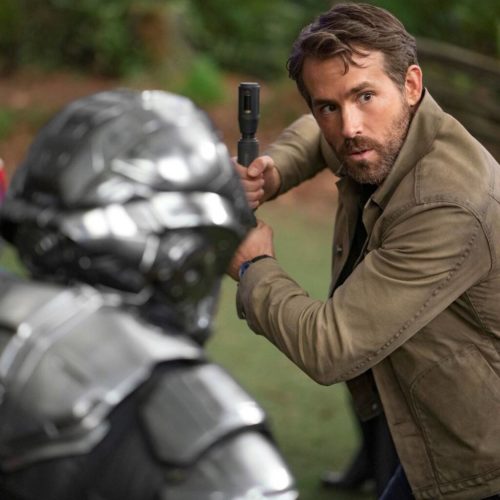 Verdict: The Adam Project is a fun, feel-good action-adventure ripped straight out of the '80s - just don't examine the plot too closely!

Ryan Reynolds plays a time-travelling fighter pilot who crash-lands in 2022 and meets his 12-year-old self.

Following on from the success of Free Guy, director Shawn Levy and Ryan Reynolds have teamed up once again for The Adam Project.

The sci-fi action-adventure begins in 2050, with time-travelling fighter pilot Adam Reed (Reynolds) under attack from other jets.

He intends to travel back to 2018 to find his missing wife Laura (Zoe Saldana) but accidentally crash-lands in 2022 and is found by his 12-year-old self, played by Walker Scobell.

Adam’s boss Maya Sorian (Catherine Keener), the evil woman who abused their late father Louis’ (Mark Ruffalo) time-travel technology, is hot on his tail so the two Adams must team up to take her down once and for all.

Levy has made an old-fashioned ’80s-style action-adventure that is good fun and highly entertaining, with some cool action sequences and an awesome soundtrack.

It is best to leave your brain at the door and just enjoy the spectacle because the time travel plot makes absolutely no sense and defies all logic.

Although the overarching plot is thin and very lightweight, the script contains some hilarious lines of dialogue and laugh-out-loud moments, many thanks to our leads.

Newcomer Scobell, as he is playing a younger version of Reynolds, has to adapt the actor’s trademark shtick.

Scobell mirrors the lightning-speed speech, the deadpan sarcasm and cocky wit, and comes across far more endearing and cheeky than his older counterpart, whose signature acting style has become overdone and slightly annoying.

They bounce off each other well and develop a good rapport, and this gets even better once Ruffalo is brought into the mix.

He has moments of comedy as well as a surprisingly moving scene that might make some viewers emotional towards the end.

Jennifer Garner is underused as Adam’s mother, who is dealing with her grief as well as her son’s, Saldana makes a small appearance that makes the most of her action skills, and Keener’s character is thinly written and her motivations aren’t clear.

The Adam Project‘s plot is littered with holes, but if you don’t think about it too hard and just go along for the ride, you will have a great time with this old school feel-good movie.

On Netflix from Friday 11th March