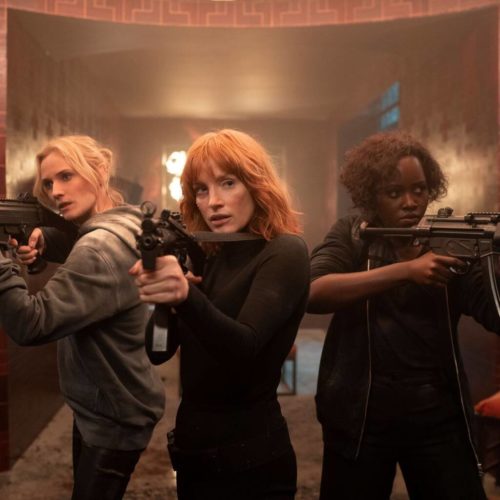 Verdict: Given the pedigree of the cast, it's a shame The 355 is just another conventional action movie, although it improves towards the end.

Jessica Chastain, Diane Kruger, and Lupita Nyong’o team up to stop a dangerous drive falling into the wrong hands in this action movie.

A few years ago, Jessica Chastain noticed all-female ensemble action films are a rarity in Hollywood so decided to make one herself, recruiting actresses from all over the globe in the process.

In this movie, directed by Simon Kinberg, Chastain plays Mason ‘Mace’ Browne, a CIA agent who is tasked with collecting a precious and top-secret drive from a Colombian agent named Luis (Edgar Ramirez) in Paris.

When the mission goes awry and one of her colleagues is killed, Mace is taken off the case.

Determined to get to the bottom of why her friend died, she decides to go it alone and find the dangerous drive herself.

But she realises she’ll need help, so she teams up with MI6 cyber-intelligence agent Khadijah (Lupita Nyong’o) and rival German agent Marie (Diane Kruger), while Luis’ therapist Graciela (Penelope Cruz) is caught up in the mix and reluctant to get involved.

Given the pedigree of the cast, it’s a shame The 355 is just another conventional action movie. It should have been a cut above the average but it’s unfortunately not.

The plot is weak and contrived, a few more laughs would have been appreciated, and the reason for protecting this mysterious drive is kept too vague for a long time.

It also took a while to get going simply because it jumps around locations a lot, it takes forever to bring these characters together and give us any solid information about the drive in order to make us care about it.

The film does improve though and seems to find its footing towards the end – it was a pleasure seeing these women in their late 30s or 40s working together and there were some cool action moments.

The standout character was Graciela, who is a self-proclaimed “normal person” and doesn’t know what to do. She is the audience’s eyes into this world and her vulnerability, which is unusual for action films, provided some laughs.

It was refreshing to see a team that isn’t just comprised of cold-hearted action robots, although Kruger’s frosty Marie comes close.

Nyong’o’s character had the best attitude – she was practical and diplomatic – and a decent if inconsistent British accent.

Fan Bingbing isn’t in this as much as advertised but she makes an impact with her role.

In comparison to the others, Chastain’s character is quite bland as she is the capable agent type we’ve seen many times before. Even so, it was entertaining seeing her kick butt and she had a commanding on-screen presence.

The 355 seems to find its groove towards the end and becomes an enjoyable watch – hopefully, there will be a sequel as it’s likely to be stronger than this introductory chapter.