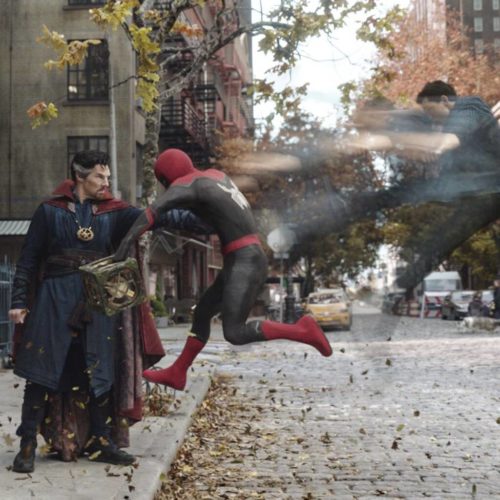 Verdict: Spider-Man fans will not be disappointed with this outing, which is filled with awesome fan-service moments that they're going to go wild for.

Peter Parker turns to Doctor Strange for help after the whole world learns that he is Spider-Man.

After months of hype and speculation about who might be in it, Spider-Man: No Way Home has finally arrived to give cinemas a much-needed boost this Christmas.

The film begins right where Spider-Man: Far From Home left off, with the true identity of Spider-Man being revealed.

The whole world now knows that Peter Parker (Tom Holland) is the man behind the mask and thinks that he killed Mysterio in the last film.

This unveiling has a negative impact on Peter’s life, with him, his girlfriend MJ (Zendaya), and best friend Ned (Jacob Batalon) being rejected by MIT due to the controversy.

Peter decides to take action and seeks out Doctor Strange (Benedict Cumberbatch), asking him to cast a spell so everybody will forget he’s Spider-Man. However, his interruptions cause the spell to backfire and all hell breaks loose.

The films in Jon Watts’ Spider-Man franchise have gotten bigger in scale every time so it’s no surprise that the third installment is grander and more ambitious than ever.

Watts has a lot of characters and story to pack into this film and he rose to the occasion and largely succeeded. He has created the most emotional, meaningful, and surprisingly moving Spider-Man film in his trilogy, a movie that explores the personal toll and sacrifice Peter has to make to be the web-slinger.

This film is much more heartfelt and serious than expected but there’s still the usual Marvel quips and levity throughout, albeit less so than the previous two.

This movie is filled with many amazing moments that fans are going to go absolutely crazy for – expect cheering, whooping, and clapping at your cinema!

However, the overarching story across the film is pretty weak. The trajectory of the villains (no spoilers here!) didn’t completely work and only one of them was particularly effective.

The sheer number of awesome fan-service moments will make up for this quite easily and probably even be enough to distract viewers from looking at the film as a whole.

The film is also very long, the pacing could have been tightened up in certain areas, and it fell into the classic Marvel trap of having a messy, CGI-heavy end battle, which was dark, murky, and hard to follow.

Holland gives a highly emotional and physically impressive performance as Peter and very much wears his heart on his sleeve. Zendaya continues to be given more to do and adds layers to MJ, while Batalon is fun as the comedic third wheel.

Spider-Man: No Way Home is by no means perfect, but the fact it has met the ridiculously high expectations placed on it is impressive in itself. Fans will not be disappointed with this film, that’s for sure.

In cinemas from Wednesday 15th December.