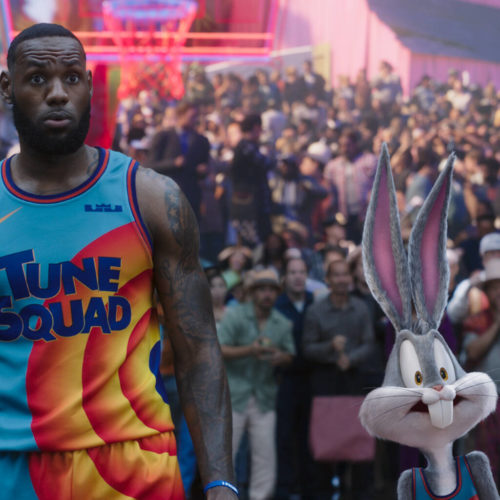 Verdict: This sequel is basically one big advert for Warner Bros. and is hampered by weak jokes and poor acting from LeBron James

LeBron James has to team up with Bugs Bunny and his Looney Tunes pals for a basketball game to rescue his son and return home.

After a 25-year wait, fans of the original Space Jam starring Michael Jordan finally get a sequel, this time starring LeBron James in the lead role.

The Los Angeles Lakers basketball hero, who plays a fictionalised version of himself, is a demanding father who is all business and no fun.

He gives his youngest son Dom (Cedric Joe) a tough ride for not applying himself to basketball and trying to follow in this footsteps, even though Dom doesn’t want to pursue that career – he’s a talented video game developer who has made his own game at the age of 12.

During a meeting at the Warner Bros. lot, they both find themselves trapped in the studio’s Server-Verse, a digital space which hosts all of its IP and is run by the evil Al, G. Rhythm (Don Cheadle).

The only way to get them out of there is for James to play a basketball game – a non-traditional match based on Dom’s video game – with Looney Tunes characters as his teammates against Dom and virtual avatars of other professional players.

This film just feels like one big advert for Warner Bros and its legacy. The plot serves as an excuse to parade their properties around, as James and Bugs Bunny explore the Server-Verse to track down other Looney Tunes, with them ending up in scenes from Superman, Wonder Woman, The Matrix and more.

Also, a lot of WB’s characters are invited to be spectators for the big match and hundreds of them surround the basketball court, which is super distracting as you end up spending your time trying to spot as many as you can.

It was also baffling to see age-inappropriate characters like Pennywise from It and droogs from A Clockwork Orange in a children’s film. Some of these cameos were fun, but there are simply too many.

There are some good ideas in here – placing the Looney Tunes in other universes was entertaining and there’s one genius and hilarious cameo-based scene that is best left unspoiled – but the story is weak, uninspired, not as funny as it should have been, and it really hammers home the message of “letting you do you”.

At one point in this movie, James makes a meta-joke – of which there are many – about athletes’ poor attempts at acting and sadly, he hits the nail on the head.

His performance leaves a lot to be desired, but in fairness to him, his Space Jam predecessor wasn’t much better. Thankfully, once James meets the Looney Tunes, there is so much else going on that you don’t think about it as much.

It’s surprising that Cheadle took on such an over-the-top, hammy villain role but he seemed to having a great time with it, and elsewhere, Steven Yeun seems to have been a victim of post-production as he has a blink and you’ll miss it part as a WB staffer.

As it’s set in a digital multiverse, it’s probably no surprise that this film goes big with the CGI. It’s too much; there’s so much to take in visually and it’s often quite garish and messy.

Given that this is a long-awaited sequel to a beloved childhood movie, it’s a real shame that Space Jam: A New Legacy is such a letdown – the fans deserved better.

In cinemas from Friday 16th July.