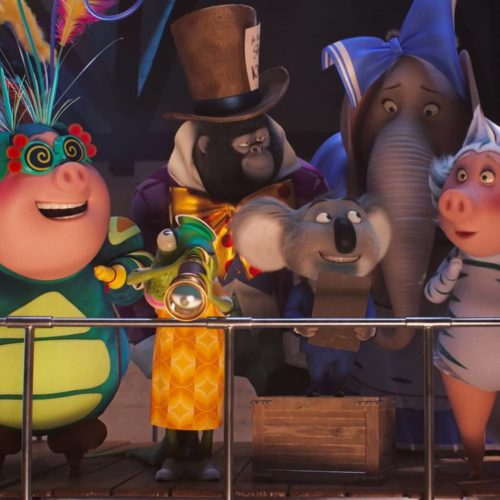 Verdict: This animated jukebox musical is heaps of feel-good fun and should appeal to kids and adults alike.

Buster Moon and his team of performers head to Redshore City to try and make it in the entertainment big leagues in this sequel.

The first Sing film was a box office smash hit when it was released in 2016, so it’s no surprise that the crew has returned for more jukebox musical action.

The follow-up begins several months after the events of the first film and Buster Moon, the koala businessman voiced by Matthew McConaughey, now has a thriving theatre.

However, he’s not completely satisfied with his small-town success and is determined to prove himself in the big leagues in Redshore City (similar to Las Vegas).

They promise him a sci-fi musical production starring retired and reclusive singer Clay Calloway (Bono) and Jimmy signs off on the concept, meaning they have to deliver the show within just three weeks.

This animated family musical is packed full of feel-good fun and will bring joy to both children and adults, particularly those who enjoy pop music. Writer/director Garth Jennings has written a script with a hilarious sense of humour and plenty of spectacle, which are apparent in the funny audition montage sequence and their staging of the show.

Like the last film, each of the main players has their own subplots within the grand story – for example, Rosita loses the leading role due to her fear of heights and is replaced by Jimmy’s daughter Porsha (Halsey). This helps bulk up the story and make you more interested in each of the characters.

This film contains more than 40 songs, from current pop tunes that will make you want to sing and dance to throwback favourites and completely left-field surprises such as System of a Down’s Chop Suey! There’s a bizarre amount of U2 songs thrown in but perhaps that was a condition of Bono’s voice role and he was perfect for the sad, gravelly-voiced Clay.

All the returning stars deliver the goods like they did the first time, although Johansson should be highlighted for her gorgeous singing voice and her character’s touching conversations with the grieving Clay. Kroll is just as hilarious as Gunter this time around too.

Looking at the newcomers, Halsey is a standout as the spoiled daughter with OTT acting ‘skills’ and Cannavale is perfectly cast as the menacing small-time gangster Jimmy.

Sing 2 is more of the same as the previous one – so if you weren’t a fan then it’s best to avoid. But if you enjoyed the first outing then this one will certainly lift your spirits.

In cinemas from Friday 28th January.