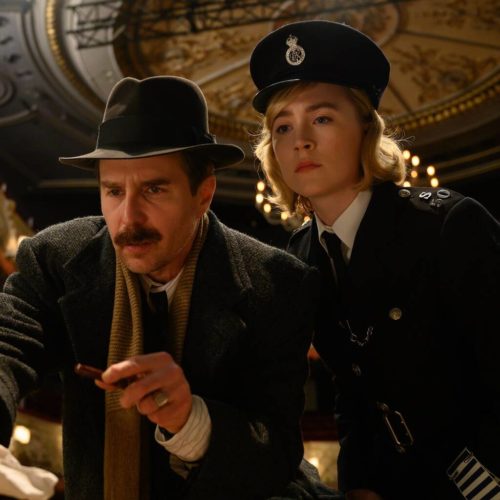 See How They Run

Verdict: This whodunit comedy is an absolute blast with hilarious performances from Sam Rockwell and Saoirse Ronan

Sam Rockwell and Saoirse Ronan are tasked with investigating the murder of an American film director in this whodunit comedy.

Saoirse Ronan is a critically acclaimed dramatic actress and she has finally turned her hand to comedy – with great success.

This farce, directed by Tom George, is set in London in 1953 and centred around Agatha Christie’s play The Mousetrap (which is still running today!)

During a party to celebrate an upcoming movie adaptation of the production, American film director Leo Kopernick (Adrien Brody) winds up dead.

Who killed him? Was it the screenwriter he was at loggerheads with, Mervyn Cocker-Norris (David Oyelowo)? Or the film producer frustrated by delays, John Woolf (Reece Shearsmith)?

There are plenty of suspects on offer and it’s up to Inspector Stoppard (Sam Rockwell) and inexperienced Constable Stalker (Ronan) to find out who did it.

Their investigation takes them on a tour of those connected to the film and those involved with the play, such as theatre impresario Petula Spencer (Ruth Wilson) and lead actors Richard Attenborough (Harris Dickinson) and Sheila Sim (Pearl Chanda).

While the majority of the characters are fictional, the latter two are not – Jurassic Park actor Attenborough was truly in The Mousetrap alongside his wife in the 1950s!

See How They Run pays homage to Christie’s classic whodunit tales but also pokes fun at the conventions in her stories. Christie is even a character in the film, played by Shirley Henderson.

Although it is inspired by Christie, it’s very much its own beast.

It doesn’t take itself seriously at all and the hijinks between the police officers are more interesting than the whodunnit reveal itself (which is a little underwhelming).

The script, written by Mark Chappell, is witty, meta, and chock-full of amusing one-liners that will most likely put a smile on your face and make you laugh out loud often.

Ronan dipped her toe into comedy with the 2017 movie Lady Bird but has never been in such a full-on farcical comedic piece.

See How They Run proves that she really can do it all. Her comic timing and line delivery are spot-on and she is responsible for a lot of the laughs as the dim-witted yet keen constable.

Her character is the opposite of Rockwell’s world-weary, depressed inspector and this makes for a great comedy partnership. They have a fun chemistry and bounce off each other well.

This whodunnit is an absolute blast. One of the most easily entertaining trips to the cinema in a while.