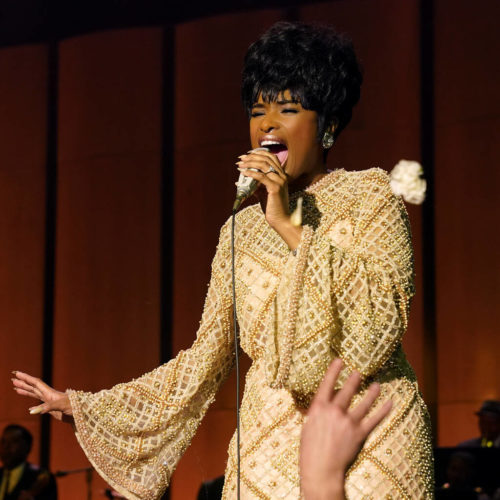 Jennifer Hudson plays the late Queen of Soul, Aretha Franklin, in this straightforward and conventional biopic.

Aretha Franklin personally chose Jennifer Hudson to one day portray her in a biopic and it’s easy to see why.

Respect charts the singer’s life from 1952 to 1972, beginning with her performing in church as a child with her dad C.L. (Forest Whitaker) to signing with Columbia – where she had very little success – before reaching her peak at Atlantic Records with hits such as Respect, Think, and (You Make Me Feel Like) A Natural Woman.

Given that Franklin is a well-known and well-regarded soul icon, it’s a shame she has been given such a generic biopic treatment. The film follows the same path as most biopics and hits the familiar beats you would expect and is also much longer than it should be, especially as it ends in 1972.

It was also a bit too respectful of its subject as it handled the dark issues in her life – sexual assault, domestic abuse, and alcoholism – in a surface level way when it could have gone a little deeper and given us a better idea of who Franklin was as a person rather than simply showing us her highs and lows during those 20 years.

The performances are the standout moments and there are plenty of them, from the early days in church to the recording studio, to big shows like Madison Square Garden once she’s a big star. They cover the majority of her hits and it was entertaining watching them come to life with Hudson, who was clearly in her element during those sequences; her voice is just insane and she easily nails Franklin’s range.

Her acting is worthy of praise too. Although she begins playing Franklin at too early an age (a 39-year-old playing a teenager doesn’t work), she did well going from a clueless teenager who just does what her dad says to finding her voice and standing up for what she wants. As an adult, she has sass, demanding diva moments and also vulnerable times when she gets lonely and turns to drink.

Elsewhere, Marlon Wayans was a surprising casting choice for her first husband/manager Ted White as he’s a very different character to his usual type. He adopted a deeper and smoother voice and came across so charming, when underneath he is a bitter and jealous man who resorts to violence. Whitaker puts in a reliable solid performance as the controlling C.L., who treats his daughter like a performing puppet, and Marc Maron is great fun as Atlantic Records’ Jerry Wexler, who puts her on the path to success.

Respect follows the biopic rulebook to the letter but it’s still worth a watch to relive all of Franklin’s hits and check out Hudson’s sensational performance.