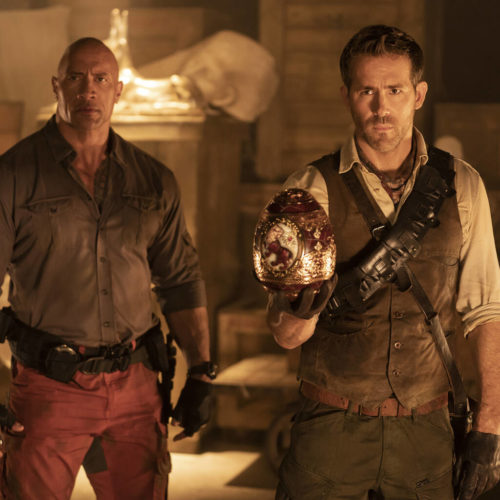 Verdict: Red Notice is formulaic, unexciting and forgettable and it might be a case of "too many action stars spoil the movie".

Rawson Marshall Thurber has assembled not one but three A-list blockbuster leads for his big-budget action-adventure Red Notice.

The action begins in Rome, Italy with John Hartley (Dwayne Johnson), an FBI profiler, and Interpol agents – led by Inspector Urvashi Das (Ritu Arya) – reporting to a museum amid reports of a planned heist of Cleopatra’s egg, one of three priceless gold artefacts.

But they are already too late – art thief Nolan Booth (Ryan Reynolds) has stolen the egg and replaced it with a fake!

That marks the start of this cat-and-mouse chase, which becomes even more complicated when a rival art thief known as The Bishop (Gal Gadot) gets involved.

If you think having three major action stars in one project would make it three times as fun and entertaining, you’ll come away from Red Notice sorely disappointed.

These actors have proven several times that they have the chops to lead action movies but they don’t seem to gel well.

It’s almost as if each other’s star power cancels the other out. It might be a case of “too many action stars spoil the movie” or perhaps they just didn’t click, but it felt like they were acting to each other rather than with.

Reynolds plays the exact same character in everything so you already know to expect a wise-cracking chatterbox.

His trademark shtick has mixed results and he doesn’t always deliver the laughs, but he does more on the comedic front than anyone else.

While Johnson is generally quite funny in his other films, he comes across as more serious and bland acting opposite the zany Reynolds.

It also doesn’t help that his character has to be deliberately vague so you’re never sure what side he’s on.

It was refreshing to see Gadot as a more playful character – a sexy femme fatale type who is cheeky, light-hearted, and a tease. She looked gorgeous and kicked butt as she always does.

There are plenty of twists, turns, and double-crossings that probably don’t hold up in this story, so it’s best to leave your brain at the door and accept the ridiculousness of it all.

The film should have been funnier, the action scenes felt formulaic and by the book, the digital effects felt cheap (despite the hefty price tag), and you’ll probably forget about the whole project as soon as the credits roll.

Never fear, it’s not all negative. The film is enjoyable enough and had some good moments and a scattering of decent laughs – but it should have been far better than this given the cast involved.

On Netflix from Friday 12th November.