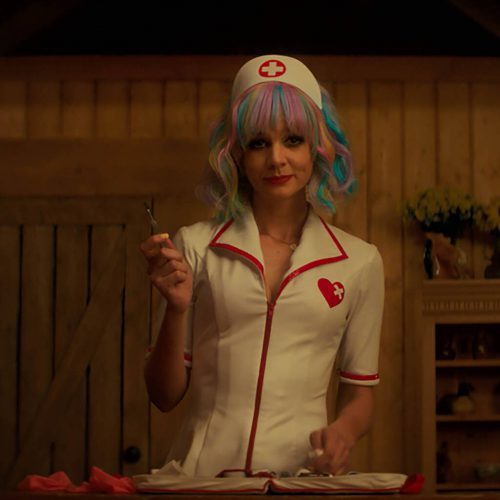 Carey Mulligan stars as a woman on a mission to teach men about the meaning of consent in Emerald Fennell’s daring directorial debut.

Promising Young Woman was recently crowned Outstanding British Film at the BAFTAs and rightly so. You don’t want to miss this bold and daring film that everybody’s talking about!

Emerald Fennell’s feature directorial debut stars Carey Mulligan as Cassandra ‘Cassie’ Thomas, who pretends to be drunk in bars to trick men into taking her home for sex so she can teach them a lesson about consent.

She also has a five-part plan to get revenge on the men who sexually assaulted her best friend Nina during college as well as those who knew about it and did nothing.

This is a bold, daring, and unapologetic movie that has a lot to say about sexual assault, consent, and how female victims are usually blamed for what happens to them while the men get the benefit of the doubt.

It’s impressive that this is Fennell’s directorial debut because it is pitched perfectly – she has complete control over the tone, how dark she wanted it to go, and how normal or crazy she wanted to make Cassie.

Her screenplay is smart and written very well; she makes her points loud and clear without making the plot preachy, and peppers the revenge tale with lighter moments that you’d usually see in a romantic comedy.

Her casting was also spot-on. Mulligan, who is best known for period dramas and ‘nice’ characters, wouldn’t be most director’s first choice for Cassie and that makes her performance so much more exciting and unexpected.

She nails the part of Cassie, who is essentially punishing herself for not being there for Nina by not letting herself move on or grow up.

Elsewhere, comedian Bo Burnham was the perfect fit for Cassie’s love interest Ryan, he has a cute, awkward personality that worked well with her character; Alison Brie was ideal as Cassie’s high-maintenance and defensive old friend Madison, and Molly Shannon makes a brief but impactful appearance as Nina’s mum.

Fennell also made the smart decision to cast actors you would normally associate with good guy roles to play Cassie’s targets, such as Adam Brody, Max Greenfield, Chris Lowell, and Christopher Mintz-Plasse.

You can’t help but wonder where it’s going to end up but rest assured it comes to a terrific and shocking conclusion that will have you thinking for hours after the credits roll.

It’s not completely perfect but it comes closer than most Best Picture Oscar nominees this year. It’s unlikely to take home the main prize but an award for Best Original Screenplay would be very deserved.

Do yourselves a favour and watch this film!

Promising Young Woman is on Sky Cinema and NOW from Friday 16 April.