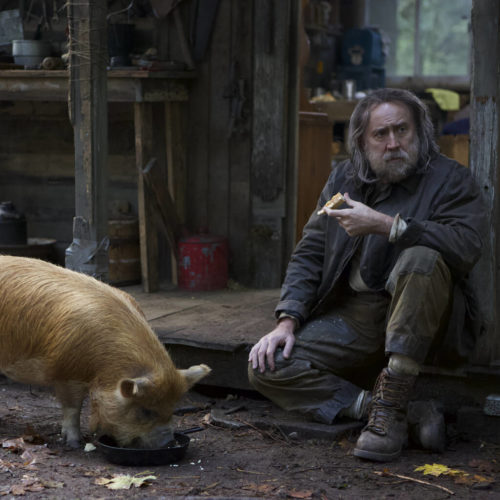 Verdict: Nicolas Cage gives his best performance in years in Pig, which is so much more than you're probably expecting it to be.

Nicolas Cage plays a truffle hunter who revisits his past in Portland after his foraging pig is stolen.

Nicolas Cage has earned a cult following thanks to the wild and out-there movies he’s starred in over the past few years, but he has now defied expectations by leading a very different kind of film.

Michael Sarnoski’s directorial debut Pig tells the story of Robin ‘Rob’ Feld (Cage), a former chef-turned-truffle hunter who has lived alone in a cabin in the middle of the Oregon woods for the last 15 years.

He is forced to come out of isolation and revisit his past life in Portland after his beloved foraging pig is stolen.

It is best to go into Pig knowing as little as possible, but even if you think you know what will happen, you’d probably be wrong.

This sounds like a really simple film about a man hunting for his pig – but it is so much more than that.

If you’re waiting for Cage to start beating up people to find his porcine pal, you’ll be disappointed as it’s not that kind of film. It is a slow, meditative study of grief, isolation, and the power of food – and is much quieter and more contemplative than you’d expect.

As the screenplay doesn’t give us the background on Robin at once, it forces us to be patient and wait as his history is gradually revealed over the course of the film.

You will eventually find out who he is, what his life looked like before he became a recluse, and why he ended up in that cabin.

Despite Robin being a gruff monosyllabic man, Amir (Alex Wolff), a young and inexperienced supplier who sells his truffles, slowly manages to peel back the layers of Robin and find out who he really is as they work together to track down the pig.

This role is so different from what we’ve come to expect from Cage and it’s such a pleasant surprise. Pig is a complete 180-degree flip from the wacky and experimental films he’s been doing of late and it’s a welcome change of pace.

Cage’s depiction of this insular, reticent, and mumbling man is nuanced and raw and more moving than you would expect.

Wolff doesn’t let the side down either. When you first met Amir, he arrives in the woods in a fancy sports car and wears designer clothing and you just assume he’s this rich entitled jerk – but you get to find out that there’s much more to him as well.

Cage gives his best performance in years in Pig, which is so much more than you’re probably expecting it to be.