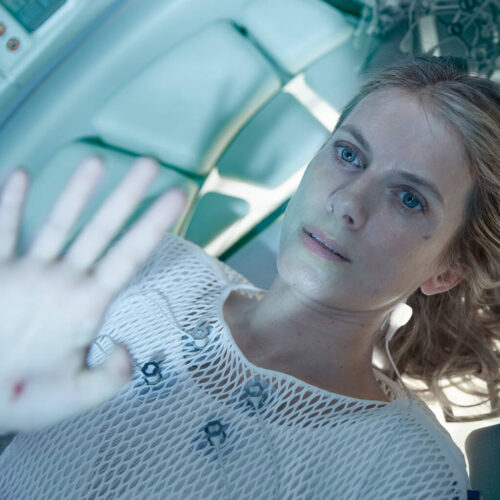 Following the success of his 2019 American horror movie Crawl, French director Alexandre Aja is back with a new high-concept feature.

The French film follows Dr. Elizabeth Hansen (Melanie Laurent), who wakes up in a cryogenic pod and has no idea who she is, where she is, or why she is there. The pod is slowly running out of oxygen so she must rebuild her memory and find a way out before it’s too late.

When a movie has such a high-concept hook as this, it runs the risk of being unable to sustain itself for the length of a feature, but thankfully, Oxygen doesn’t have that problem.

However far-fetched the initial idea may be, it is gripping from the outset and remains that way as the story continues to evolve.

Aja manages to keep the momentum going throughout by gradually revealing details about Elizabeth’s identity and her situation, introducing new voice characters that provide vital information, and coming up with new issues inside the pod.

The audience is as clueless as Elizabeth is, so we’re constantly guessing what’s happening and who is telling the truth, especially as she uses the AI in her pod – M.I.L.O. (voiced by Mathieu Amalric) – to contact the police and other members of the outside world for help and search online articles and social media for clues.

It can be challenging to keep a film interesting when there’s only one character, one setting, and the action is playing out in real-time, but Aja cleverly employs an interesting mix of dynamic camera movements and shots to keep it looking exciting, and adds new layers of complexity to the mystery with the voice interactions.

Ultimately, the biggest reason why Oxygen works is Laurent’s performance. With the exception of dream-like flashbacks, she is the only actor on screen for the whole film and carries the movie easily.

Her performance is commanding, captivating, and she delivers a convincing portrayal of someone filled with panic and on the edge of hysteria, but has to keep a level head to find a solution.

Aja has crafted a tense claustrophobic sci-fi thriller that grabs attention immediately and never lets it go as well as a mystery that unravels itself.

Please note that Netflix will automatically default to the English dubbed version but the original French is available with subtitles.