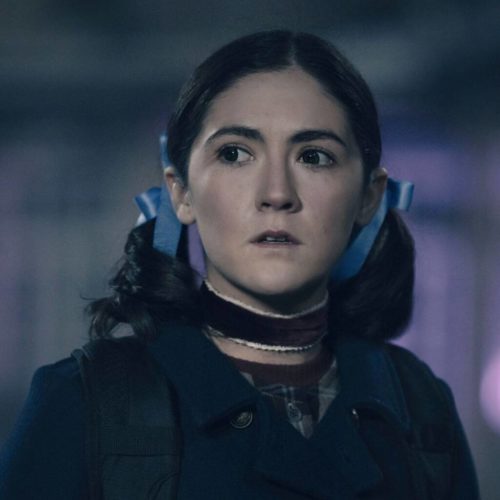 Verdict: This sequel is nowhere near as scary as the original but it presents audiences with a fresh but totally barmy storyline

Isabelle Fuhrman is back as the psychotic Esther/Leena in the prequel to 2009 horror Orphan.

Thirteen years after terrifying audiences as an adult posing as an orphaned child, Isabelle Fuhrman returns as Esther/Leena for this prequel, Orphan: First Kill.

In the 2009 film, Fuhrman played nine-year-old orphan Esther, who infiltrated a family led by Vera Farmiga and Peter Sarsgaard and picked them off one by one, while it was revealed she was actually Leena, a 33-year-old Estonian woman with a rare hormonal disorder that stunted her growth.

The prequel is set two years earlier when Leena manages to escape the Saarne psychiatric facility in Estonia.

She scours an American missing person’s database and finds a girl she bears a resemblance to – Esther Albright – and pretends to be her.

She is flown to Connecticut to be reunited with the Albright family, led by Tricia (Julia Stiles) and Allen (Rossif Sutherland) – but all is not what it seems.

The original film was successful because of the jaw-dropping reveal of Esther’s true identity.

Now she is no longer shrouded in mystery, Esther isn’t as creepy or scary as she was before.

She is still very dangerous but nowhere near as unpredictable because we know who she is now and how she operates.

You might expect this film to follow the same template as the original – and it does, at first.

But this prequel has a mind-blowing twist of its own – one you probably won’t see coming – that changes the game completely and makes it feel fresh and exciting again.

The twist is preposterous and plucked straight out of a soap opera, but it made the film so much more fun.

Hats off to director William Brent Bell and his team for making it possible for Fuhrman to return as Esther after 13 years.

In the original, Fuhrman was only 12 when she portrayed a nine-year-old, but she’s now 25 playing a character even younger (presumably seven).

What’s more impressive is that most of the techniques they used to make her seem like a child were old-school practical effects – make-up, forced perspective, certain camera angles, lighting, and body doubles (there is a little CGI in there too).

But none of those effects would work without Fuhrman’s convincing performance.

She is so believable as a child – although admittedly not as young as seven – and as an adult pretending to be one.

Stiles has a wild, meaty role that is a lot of fun to watch and Sutherland plays the kind and oblivious patriarch who has no idea what’s going on under his own roof.

Orphan: First Kill is nowhere near as scary as its predecessor but it is much better than expected.

It isn’t a tired repeat of the original and presents audiences with a fresh story that is completely barmy but very enjoyable.

In cinemas from Friday 19th August.