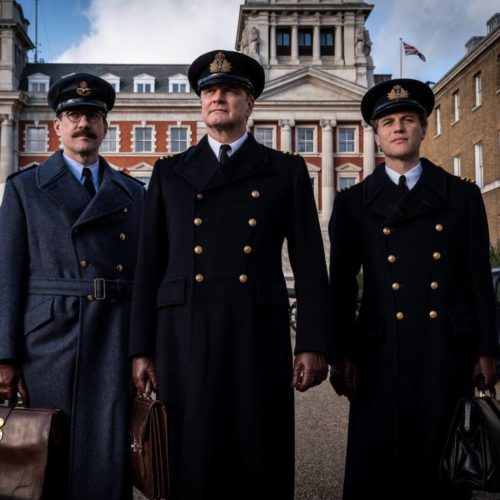 Verdict: Operation Mincemeat tells an incredible true story in a gripping and interesting manner, with top performances from Firth, Macfadyen and Flynn

Colin Firth and Matthew Macfadyen lead a deception mission to disguise Britain’s next target for invasion during World War II.

John Madden’s new war drama shines a light on the incredible true story of Operation Mincemeat and its operatives.

British forces want the Germans to think they are planning to invade Greece instead of their actual target – Sicily.

To do this, Ewen and Charles suggest having a fictitious Royal Marine wash up in Spain – presumably drowned – with “classified” documents about the fake Greece attack to throw their enemy off the scent.

Once their idea is tentatively approved, they create their team – featuring Jean Leslie (Kelly Macdonald) and Hester Leggett (Penelope Wilton) – and set about creating the identity of their drowned comrade Major William Martin.

They must find a suitable body and create a believable backstory for Martin for the operation to succeed.

This wartime drama could have easily been quite stuffy and serious as the story requires a lot of strategy and planning meetings but, thankfully, it’s not dull at all.

The narrative is interesting, moves along rather quickly during the prep stage, and the film doesn’t take itself too seriously.

However, the pace slows down and the story becomes less gripping after the operation is launched.

Like the agents, we have to wait to find out if it is a success, plus we are introduced to new characters on the continent and it’s hard to follow who is who.

Also, there is a love triangle subplot between Ewen, Jean, and Charles that didn’t feel completely necessary.

At one stage, it almost risked overtaking the operation in terms of screentime but thankfully, Madden dials it back.

Firth can always be relied upon to deliver a brilliant performance and is perfectly cast as Ewen.

Despite this, he is outshone by Macfadyen, who gets the entertaining comedy lines as the outspoken and brutally honest Charles.

Macdonald’s Jean is a smart, independent woman who stands by her principles, and Wilton’s Hester has a maternal bond with Ewen, having been his assistant for many years.

Those are the core four, but the star of the whole show is Johnny Flynn as Ian Fleming – yes, THAT Ian Fleming (of James Bond fame).

He is charismatic and gets to say plenty of knowing references to his later career.

If you aren’t aware of the true Operation Mincemeat story then it’s worth checking this film out as it shines a light on an incredible mission and tells it in a gripping and entertaining way.

In cinemas from Friday 15th April.