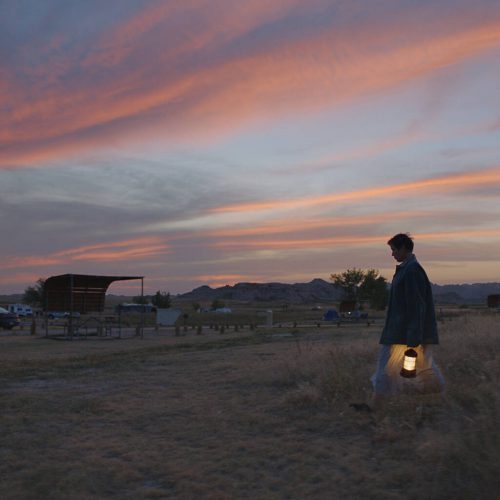 Following on from its success at the Oscars, where it won three prizes including Best Picture, Nomadland has finally got a release in the U.K.

The film stars Frances McDormand as Fern, a fictional widow in her sixties who finds a new life on the road as a nomad, moving around the American West finding work in her van, after she loses her job and home as a result of the US Gypsum plant in Empire, Nevada shutting down in 2011.

Nomadland depicts a year in the life of a van-dweller, with Fern’s seasonal job at Amazon over the Christmas holidays serving as bookends of the story.

The film is rather slow and there’s not much of a plot, so it won’t appeal to everybody, but there’s a lot to like about it – Chloe Zhao, who became the second female Best Director Oscar winner recently, has created a moving, intimate and deeply human portrait of nomadic life and you can’t help but get invested in Fern and her fellow ageing nomads.

Zhao wrote the screenplay based on American journalist Jessica Bruder’s 2017 non-fiction book, Nomadland: Surviving America in the Twenty-First Century, and prepared for the film by travelling around in a van meeting nomads, including some of those who Bruder interviewed for her work.

She cast real-life van-dwellers Linda May, Swankie, and Bob Wells to play fictionalised versions of themselves in the movie, sticking to her tradition of hiring non-professional actors, and their natural performances add to the film’s authentic, almost documentary-style feel.

McDormand, who brought Bruder’s book to Zhao, immersed herself in the nomad community and blends in with the non-professionals very well. Fern always insists she’s fine despite various obstacles such as the cold and the occasional solitude, but McDormand’s eyes make it clear that she’s exhausted and still mourning the loss of her husband and town.

The Fargo star can always be depended on to bring her A-game and Nomadland is no exception, so it’s no surprise she won the Best Actress Oscar.

However, it’s a shame the movie didn’t win Best Cinematography because Joshua James Richards’ work is stunning. There are so many beautiful shots of sunsets and desert landscapes and intimate character close-ups.

Zhao deserved her Best Director win as she’s a unique and exciting filmmaker with a distinct visual style that she’s cultivated throughout her debut Songs My Brother Taught Me, her second feature The Rider, and now Nomadland. It’ll be interesting to see how this translates to her first blockbuster – Marvel’s Eternals.

Streaming on Star on Disney+ from Friday 30th April and in cinemas on 17th May.