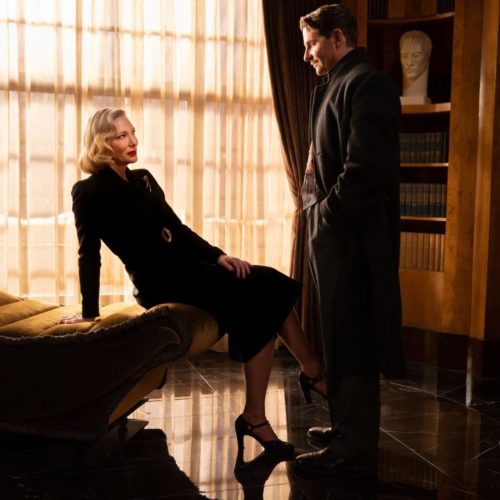 Verdict: Nightmare Alley features terrific performances and stunning visuals but it will certainly test your concentration

Bradley Cooper and Cate Blanchett devise a scheme to scam wealthy customers into paying for his psychic act.

Guillermo del Toro is best known for his supernatural films and creature features so he breaks into new territory with Nightmare Alley, which is neither of those things.

This neo-noir psychological thriller follows Stanton ‘Stan’ Carlisle (Bradley Cooper), a shady and suspicious man who joins Clem (Willem Dafoe)’s carnival. During his time at the travelling carnival, Stan learns how to pretend to be a psychic from Zeena (Toni Collette) and he takes those skills with him when he runs off to New York with Molly (Rooney Mara).

In the Big Apple, Stan wows the wealthy elite with his clairvoyant act, with the exception of psychoanalyst Lilith Ritter (Cate Blanchett) who tries to test his ‘powers’. She subsequently devises a scheme with Stan in which they scam wealthy customers willing to pay for private psychic readings.

This film, the second movie adaptation of William Lindsay Gresham’s novel after the 1947 version, is really dark and bleak and delves into the underbelly of society. Del Toro weaves a complex web of mystery and deceit which keeps you constantly guessing.

You know Stanton and Lilith’s scheme will be their downfall; it’s inevitable with these films, but you have to wait and find out how – and the conclusion is unexpectedly bloody and haunting.

However, the film is far too long at two hours and 20 minutes and it felt even longer than that. While the first half, set at the carnival, is interesting enough to watch, some scenes should have been chopped from there to reduce the runtime. It’s not just long – it is also glacially paced and may well test the patience of some viewers.

It would be going too far to say Nightmare Alley is a case of style over substance as the film is very substantial. But the visuals certainly do a lot of the work as well – the production and costume design are both terrific and the cinematography is stunning.

Stanton is a change of pace for Cooper, who intrigues as a mysterious and morally corrupt man who doesn’t know when to draw the line. Blanchett’s Lilith is the classic femme fatale, who uses her sex appeal to manipulate Stan and cannot be trusted.

The only redeemable character on offer is Mara’s Molly, who thinks she’s running away to be with the man she loves in the big city. Unfortunately, she gets caught up playing the assistant in Stan’s racket and dislikes what she’s required to do.

Elsewhere, Dafoe is perfectly cast as carnival boss Clem, Richard Jenkins is suitably creepy as Stan’s dangerous client Ezra Grindle, and Collette should have been in it more as the alluring Zeena.

Nightmare Alley is an overlong slow-burner that does eventually pay off in the end – you just need to stick with it.

In cinemas from Friday 21st January.