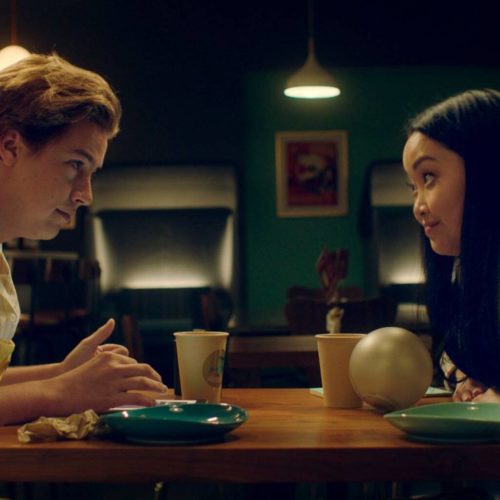 Verdict: Cole Sprouse and Lana Condor's charming performances make this average romantic comedy more entertaining than it should be

Cole Sprouse and Lana Condor fly to Mars to be reunited with their loved ones in this sci-fi romantic comedy.

Tired of the same old romcoms? Well, Moonshot takes the standard romantic comedy and gives it a fresh sci-fi twist.

The film, set in 2049, stars Cole Sprouse as Walt, who has always dreamed of going to Mars and has unsuccessfully applied for Kovi Industries’ student programme more than 30 times because he’s not intelligent enough to help the team terraform the Red Planet.

At a party, he meets and falls for Ginny (Emily Rudd), who is about to leave for Mars the following day.

He becomes even more determined to go into space and uses his new friend Sophie (Lana Condor) to help with his mission.

She has brought a ticket to Mars to visit her long-distance boyfriend Calvin (Mason Gooding) and Walt convinces her to let him escort her to the ship so he can sneak on via the escape pods.

Once onboard, to avoid his status as a stowaway being rumbled, Sophie lets Walt stay in her bedroom and pretends he’s Calvin.

You can probably guess what happens next!

Moonshot may have a sci-fi twist but it follows the same tried and tested rom-com formula and is very predictable, hitting most of the beats you’d expect.

But despite this, it is still lovely to watch Walt and Sophie’s journey from frosty acquaintances to friends and possibly more.

That’s all down to Sprouse and Condor’s charming, sincere performances.

They make the film funnier and more entertaining than it should be (the script isn’t the strongest) and you root for them to be together. They have excellent comic timing and good chemistry.

Although it’s somewhat successful as a rom-com, the sci-fi element is a bit of a letdown.

It’s quite obvious that director Christopher Winterbauer didn’t have the budget to do space well and this is apparent in the few scenes that take place outside the ship.

Walt spends the whole movie talking about how he dreams of being on Mars and then when we get there, the story remains inside and we only briefly see him on the ground on the planet once.

Moonshot didn’t feel like it was even set in space most of the time and failed to give us that awe-inspiring feeling you usually get during a sci-fi movie.

Wondering why the movie is called Moonshot?

Well, that’s a very good question. The film has nothing to do with the moon so the title doesn’t make any sense.

Winterbauer clearly wanted to make a romantic comedy with a difference but at the end of the day, Moonshot is still your bog-standard rom-com and quite a forgettable one at that.