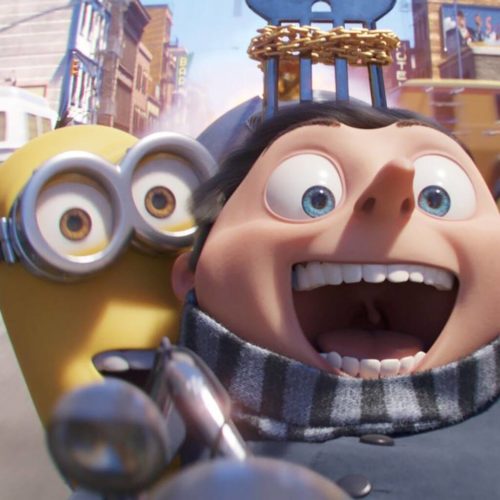 Verdict: Not the strongest film in the Minions/Despicable Me franchise, but still a lot of laugh-out-loud fun

Following on from the phenomenal commercial success of their 2015 prequel spin-off Minions, the small yellow creatures are back for more mayhem in Minions: The Rise of Gru.

At the end of their 2015 film Minions, Kevin, Stuart and Bob (all voiced by Pierre Coffin) and their friends discover a young Gru (Steve Carell) and decide he will be their new master.

Jump forward a few years to the 1970s and 12-year-old Gru’s relationship with his loyal helpers is well established in the basement of his mother’s home.

One day, he is invited to interview to be a member of the Vicious 6 supervillain group.

When they mock him during the interview and send him packing, Gru steals a precious and powerful stone to prove his villain credentials – and ends up with a group of baddies on his tail.

This animation is just as entertaining as the previous Minions film plus the three earlier Despicable Me movies.

The plot isn’t very strong – Gru and the minions are basically just being chased by better villains – but the hilarious moments and action-comedy set-pieces almost make up for the so-so overall story.

The film is a lot of fun and is filled with a ton of jokes and silly slapstick comedy to make sure both kids and adults alike have something to laugh over.

There is also loads of action and a groovy soundtrack filled with ’70s hits.

Animation studio Illumination struck gold when they invented the minions.

The little yellow guys are ridiculously popular because they’re so funny, stupid and enjoyable to watch, plus they are adorable.

Although they talk gibberish, you can easily follow their chats thanks to their expressive faces and Coffin’s fantastic vocal work.

Carell and Coffin’s vocals are well established and loved in the franchise and they are joined by plenty of newcomers this time around – Taraji P. Henson voices a Foxxy Cleopatra-style villain called Belle Bottom and Alan Arkin is the elderly baddie Wild Knuckles, who is ousted from the Vicious 6 and replaced by Belle.

The rest of the Vicious 6 are voiced by a who’s who of action stars – Jean-Claude Van Damme voices Jean-Clawed, Dolph Lundgren is Svengeance, Danny Trejo voices Stronghold and Lucy Lawless is Nunchuck, the coolest one of the lot.

Outside of the group, action hero Michelle Yeoh appears as Master Chow, who helps teach the minions martial arts.

If your children want you to take them to see Minions: The Rise of Gru at the cinema this weekend, rest assured that it won’t be too much of a chore (it’s only 88 minutes). You might even have a good time too!

In cinemas from Friday 1st July.