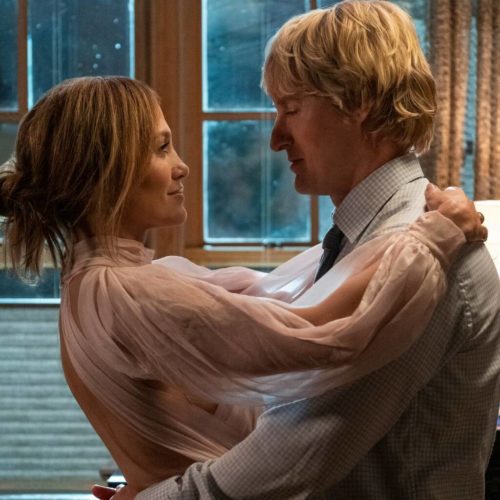 Verdict: The concept of Marry Me is far-fetched and ridiculous but Jennifer Lopez and Owen Wilson bring serious charm to heartwarming film

Jennifer Lopez marries Owen Wilson on a whim at her concert after being left heartbroken on stage.

In the early 2000s, Jennifer Lopez was a romantic comedy staple, and she revisits the genre with her latest movie Marry Me.

In Kat Coiro’s film, Lopez plays world-famous pop superstar Kat Valdez, who is about to marry her singer boyfriend Bastian (Maluma) at a concert in New York after they perform their duet Marry Me.

However, as she heads to the stage, an article is published accusing Bastian of cheating, accompanied with video evidence.

Heartbroken on stage in her wedding dress, Kat spots maths teacher Charlie Gilbert (Owen Wilson) in the audience holding a “Marry Me” sign and agrees to wed him instead.

To save herself from a PR disaster afterwards, Kat decides to stay married to Charlie and get to know him better.

We can all agree that the premise of Marry Me is incredibly far-fetched and contrived, but if you ignore that cynicism and just roll with it, you will have the best time.

It is predictable and cheesy but also feel-good and comforting, which is what all rom-coms should be.

Because the plot is so outrageously silly, viewers could have easily written it off – but they won’t because of Lopez and Wilson. They work so well together and bring so much charm to the story.

Although the ending is obvious from the beginning, it was still a fun journey watching our leads get there.

Seeing them getting to know each other and bridging the gap between famous superstar and normal teacher was lovely.

Lopez is the perfect person to play Kat as you can draw many parallels between them both. Lopez is a recognised celebrity around the globe who has been married three times, just like Kat.

Her character feels like her love life is the punchline of jokes, something perhaps she can relate to. Lopez is also a triple-threat who is capable of pulling off all the singing, dancing and acting the role requires.

Wilson does exactly what you would expect him to do and doesn’t throw himself into it as fully as his co-star – but he really works as the dull but oddly charming Charlie.

Colombian singer Maluma isn’t the greatest actor ever but he just needed to play a sexy singing sensation and he nailed that aspect of the role.

The rest of the supporting cast is excellent though – Chloe Coleman is sweet as Charlie’s daughter Lou, Sarah Silverman steals all of her scenes as his hilariously outspoken friend Parker, and Game of Thrones star John Bradley is lovely as Kat’s supportive manager.

The concept of Marry Me may be ridiculous but it is a cute old-fashioned rom-com that feels like a big warm hug so it’s worth trying to suspend your disbelief.