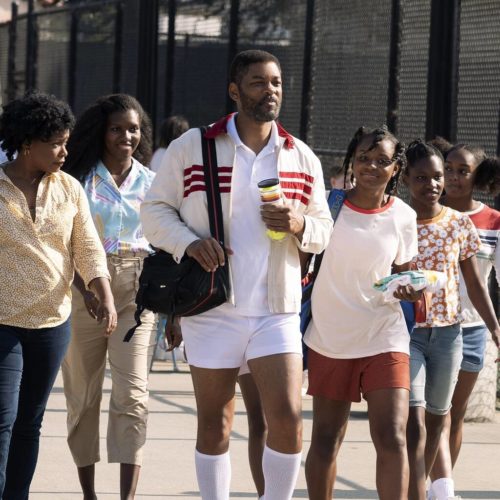 Verdict: This conventional biopic doesn't do anything new but the story is so moving, inspirational, and uplifting that it doesn't matter

Will Smith plays Venus and Serena Williams’ father and tennis coach in this inspirational biographical drama.

Will Smith has become a firm favourite for a Best Actor Oscar nomination for his portrayal of Venus and Serena Williams’ father Richard in King Richard, which comes to cinemas this week.

Richard knows he’s coaching two extraordinary tennis stars and will need help to take their game to the next level – but this is easier said than done as tennis is a notoriously white and privileged sport.

It proves virtually impossible to find a professional coach willing to work with his daughters for free but he keeps persevering and finally finds Rick Macci, who relocates the family to Florida.

The career path for the girls – then aged nine and 10 – should be relatively straightforward from then on, but it’s not plain sailing – Macci and Richard often butt heads over Richard’s stubbornness and his unconventional plan for his daughters’ success.

It seemed like an odd decision to focus a biopic on Richard rather than his world champion daughters and tell the story of their early beginnings through his perspective.

But that’s not to say he’s an unworthy subject – he kept slogging away in the face of resistance and adversity to get them out of Compton and turn them into superstar athletes.

However, he’s not a particularly likeable character a lot of the time.

He’s stubborn, egotistical, and overbearing and you will feel infuriated watching him ignore professional advice and make big and potentially detrimental decisions for his children.

It would have been easy for Smith to have made Richard this one-note interfering character but he doesn’t take that route – he gives him complexity and nuance. This is his best performance in years and it will likely score him an Oscar nomination.

Although the title might suggest that this is the Richard show, it is thankfully not the case and we still get plenty of time with the girls, particularly Venus.

Sidney was the revelation of the film and she had a lot to do, from nailing Venus’ tennis moves to getting the courage to stand up to her father.

Singleton has much less screen time as Serena lives in Venus’ shadow during this movie, which is a shame as it would have been nice to see her do more.

Aunjanue Ellis is potentially another Oscar nominee for her portrayal of Oracene ‘Brandy’ Price, the girls’ mother. She stands her ground with Richard and takes no-nonsense.

King Richard is a conventional and familiar biopic and although it doesn’t do anything new, it doesn’t really matter because the story is so moving, inspirational, and uplifting.