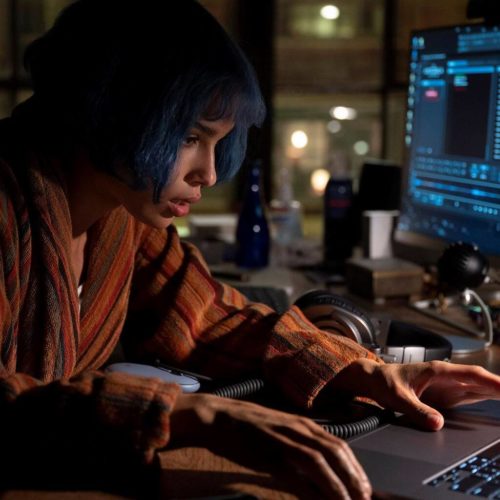 Zoe Kravitz plays an agoraphobic tech worker who discovers a recording of a crime and decides to get to the bottom of it.

Zoe Kravitz may be playing Catwoman in The Batman movie in a couple of few weeks, but let’s not sleep on her first 2022 offering, KIMI.

The company has recently launched the smart speaking device KIMI (similar to Alexa or Siri) and they controversially monitor their consumers to help improve KIMI’s intelligence.

Angela spends her days going through error reports and writing code so KIMI can understand demands better, and one day, she comes across a recording of what sounds like a violent crime.

She reports the recording to her bosses and soon realises that they are all involved in this massive scandal and are trying to cover it up – by any means necessary – and she is no longer safe in her Seattle apartment.

On the surface, you can easily draw parallels between KIMI and last year’s The Woman in the Window.

After all, they’re both about an agoraphobic woman with mental health issues who needs to leave her home to get to the bottom of a crime – but that’s where the similarities end.

First of all, KIMI feels very modern – it features working from home and the Covid-19 pandemic is still an ongoing concern.

Secondly, Angela is a very smart, tech-savvy and resourceful person, unlike Amy Adams’ character. And lastly, it’s a regular thriller rather than a psychological one.

The film is very contained to begin with as we are confined to Angela’s apartment, but in the latter half, the world expands and it becomes an exciting chase, with Angela as the mouse and mysterious forces as the cat.

The sense of tension and threat build here and reach a thrilling conclusion.

KIMI is only 89 minutes long and it should have been slightly longer as it skips a lot of detail about the scandal. It would have been more satisfying to know more information about what happened and why.

Kravitz has to carry this movie on her shoulders and she easily accepts this responsibility.

She is in almost every scene as her quirky, blue-haired character and is always intriguing and captivating. She does a terrific job as the lead.

Soderbergh – who is known for great films such as Side Effects, Ocean’s Eleven, and Magic Mike – has once again created an enjoyable movie that is worth checking out.