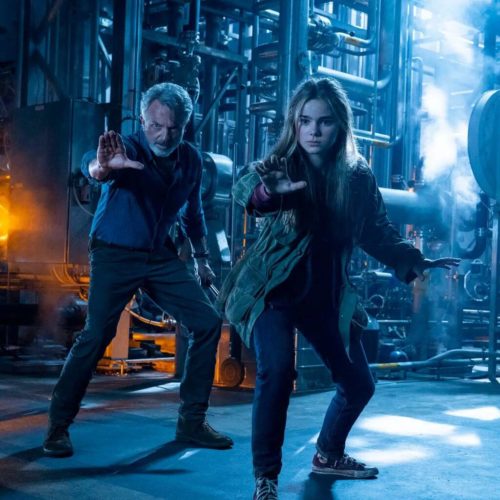 Verdict: While Jurassic World Dominion has its moments, it's far from a Jurassic classic.

Jurassic World Dominion is the latest in the dinosaur franchise.

When Steven Spielberg’s adaptation of Michael Crichton’s novel Jurassic Park stomped onto screens in 1993 it was a revelation – and its mechanical and CGI dinosaurs left a generation in awe and terror.

In 2018’s, Fallen Kingdom, the dinosaurs were let loose across the world, and so here we are with Jurassic World Dominion – on a planet where humans and reptilian giants have to co-exist.

That’s in part as one of the underrated joys of the original was the simplicity of its moral message and concept – that, to paraphrase Goldblum’s philosophising mathematician Dr. Ian Malcolm, just because science could do things doesn’t mean it should.

Here it is muddied by the fact that battle has been unequivocally lost.

We have a new villain in the biotech giant BioSyn, led by Lewis Dodgson (Campbell Scott), looking uncannily like Apple chief Tim Cook, whose Dolomite mountain lair is a repository and giant laboratory where captured dinosaurs are sent for research that will benefit humanity.

Whereas the moral ambiguity of scientific meddlers in the original served to further its message, here it confuses as to what the point is other than wanting us to stare at a long line of digitally rendered dinosaurs – with diminishing returns as rampaging beasts are the default rather than a shock.

There are some interesting ideas in the film, like the notion Dr. Malcolm is so exasperated at being ignored he has given up and sold out, or BioSyn’s tech evangelist facade, which could be relevant in a world where Silicon Valley’s claims of benevolence seem evermore laughable.

However, none are truly developed in favour of adding dinosaurs to action sequences borrowed from other, better films.

We start off with scenes reminiscent of a Western before the film morphs into a James Bond knock off – The Man with the Golden Gunnersaurus, if you will – before reverting to Mission: Impossible, and Indiana Jones.

There’s even a bit that seems a knock-off of Star Wars’ Mos Eisley spaceport.

That’s not to say there’s not enjoyable aspects. It’s great to see the original’s stars back together, and they, at times, provide it with some heart.

But Pratt and Howard’s lack of chemistry is glaring and their quest to rescue their daughter often seems extraneous to the more interesting one undertaken by Jurassic Park’s oldies.

At almost two-and-a-half hours long it feels like two films Trevorrow spliced together to give everyone (including new cast members DeWanda Wise and Mamoudou Athie) something to do and cram every idea he and co-writer Emily Carmichael had in.

After an excellent revival and a serviceable follow-up, one hoped Dominion would provide a fitting end point to this iteration of the Jurassic Park/World franchise. Instead, it may have just made it extinct.