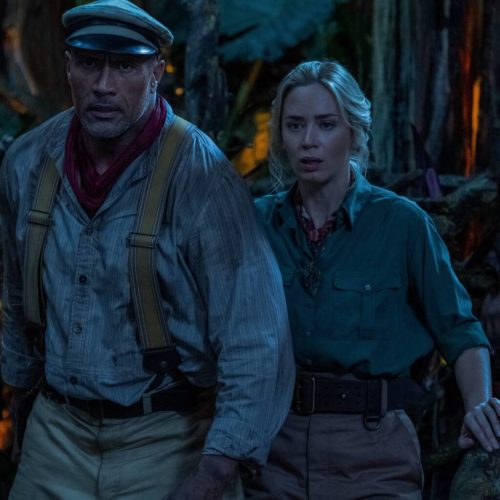 Verdict: Jungle Cruise is a feel-good throwback action-adventure that looks set to be the family movie of the summer

Emily Blunt and Jack Whitehall hire Dwayne Johnson to be their driver as they head down the Amazon River on a perilous quest.

Following on from the success of Pirates of the Caribbean, Disney has turned another of its popular theme park attractions into a movie.

Jungle Cruise, directed by Jaume Collet-Serra, is set in 1916 and follows Dr Lily Houghton (Emily Blunt), a pioneering botanist who wants to find the Tears of the Moon, a flower that is believed to have healing powers that could benefit modern medicine.

After stealing an arrowhead from a society in London, she goes to Brazil with her reluctant brother MacGregor (Jack Whitehall) to find a riverboat captain to take them up the Amazon River on their quest.

But in a case of mistaken identity, she ends up meeting skipper Frank (Dwayne Johnson) instead of his more esteemed rival Nilo (Paul Giamatti).

Their journey is filled with peril in the form of deadly animals, raging rapids, cursed mercenaries, and a German aristocrat named Prince Joachim (Jesse Plemons) in hot pursuit.

Jungle Cruise is an old-school family action-adventure film reminiscent of Romancing the Stone, 1999’s The Mummy, the first Pirates of the Caribbean, and the Indiana Jones franchise.

It is a lot of fun and an entertaining thrill ride for all the family – there’s screwball comedy, deliberately lame dad jokes (from Johnson’s Frank), exciting action setpieces and stunts, and some darker thrills that might scare children.

It’s not completely perfect though – the film is too long, extremely predictable, and too dependent on CGI, particularly with the jungle animals and creepy mercenaries.

Blunt is perfectly cast as the determined and fearless Lily, who won’t take no for an answer and wears the trousers (quite literally). She has strong chemistry with Johnson and they both seem to be having fun making this.

While there is a convincing argument that MacGregor should have been portrayed by a gay actor, Whitehall embodied the spoiled rich boy character well, even if his jokes didn’t always work.

However, it’s a shame Disney committed to having its first-ever major openly gay character and then didn’t let him say the word “gay” itself.

The scene which addresses his sexuality will easily go over most youngsters’ heads, which was presumably the intention.

Elsewhere in the cast, regular baddie Plemons does a terrific job as the campy villain. His German accent was fantastic and he was hilarious.

While he served as the fun villain, there is also Edgar Ramirez as Aguirre, a cursed mercenary that has quite a scary appearance.

Overall, Jungle Cruise is a feel-good throwback action-adventure that looks set to be the family movie of the summer.

In cinemas and on Disney+ with Premier Access from Friday 30 July.