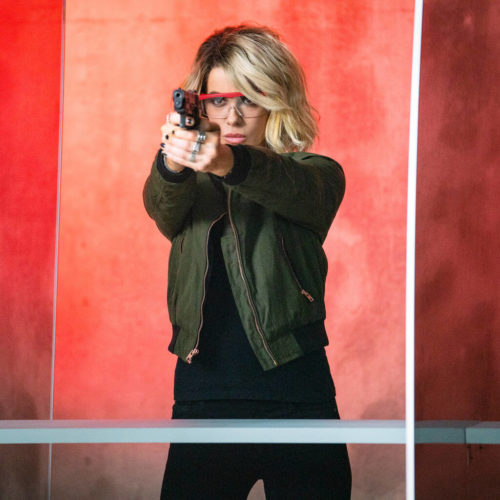 Verdict: Kate Beckinsale is an entertaining kickass lead in this fun lightweight action-comedy, which progressively declines in quality.

Kate Beckinsale returns to the action genre to play a woman who is unable to control her rage.

After spending many years in the action genre with the Underworld franchise, Kate Beckinsale is returning to her roots.

In Tanya Wexler’s action-comedy, Beckinsale stars as Lindy, a woman who has unnaturally high levels of cortisol in her body so she feels her emotions more keenly than normal.

Lindy has serious anger management and impulse control issues, and often visualises how she’ll exact violence on the person who has annoyed her.

Her psychiatrist, Dr. Munchin (Stanley Tucci), has designed a device that sends electric shocks throughout her body at the touch of a button to stop her snapping.

Munchin advises her to try dating, so she meets Justin (Jai Courtney), who seems to be her ideal man.

Sadly, much to Lindy’s despair, Justin is murdered before their third date night – so she becomes hell-bent on getting revenge.

Jolt is silly, fun, doesn’t take itself seriously, and delivers many laugh-out-loud moments thanks to its witty and rude script and the comical montage moments of Lindy’s violent impulses and her visualisations of how she’ll act on her anger.

The beginning seemed promising, but from Justin’s murder onwards, it rapidly declined in quality – the acting seemed over-the-top, fake, and the action scenes felt cheap.

The production design also had its issues because the New York street scenes looked so unrealistic; you could tell it was filmed on a backlot rather than the Big Apple, and there were a couple of scenes so obviously shot on London’s Southbank.

Predictably, we follow Lindy as she formulaically beats up a series of bad guys to find the one who killed Justin, although she has the added headache of Detectives Nevin and Vicars (Laverne Cox and Bobby Cannavale) getting in the way.

Some of these violent confrontations are fun but there aren’t any stakes because you know Lindy will always come out on top.

And if that wasn’t enough, the film really botches its climactic twist. It’s super cheesy, wasn’t explained properly, and felt very rushed. This scene should have been expanded by a few minutes to make everything clearer.

It was a joy watching Beckinsale using her kickass physical skills once again, but this time she’s also given the opportunity to employ her cheeky sense of humour so the role suited her perfectly.

However, the acting, in general, isn’t great and at times you couldn’t help but wonder if it was deliberate or not.

Cox, in particular, doesn’t come off well, and Cannavale isn’t bad but it’s surprising he signed up for this.

There is plenty to enjoy about this lightweight action-comedy, particularly in the first half-hour, so it’s a shame it progressively got so bad. Only time will tell if it falls into the “so bad it’s good” camp!